Do The Pittsburgh Penguins Need To Add…

Magic Players Will be Venturing for Value…

Cloud9 Cooldown: Glancing Over at the Panic…

What is The Schedule For Week 11…

Update: Rise of the Elements Available on PBE

Since the initial release of this article, TFT’s Set 2 has hit PBE servers and is available to play. For a full English translation of everything included in Rise of the Elements, @Mortdog released a comprehensive blog post that details all of the champions and traits.

Additionally, since release, The Game Haus has created a new item cheat sheet for the updated items, as well as Champion, Class and Origin tier lists for Patch 9.22. These will all be updated daily as changes are made by developers.

It appears that certain TFT influencers across the scene have been given early access to different aspects of TFT’s Set 2, which is set to be announced tomorrow in the developer’s notes. Because news about this appears to be gradually coming out today, October 21, this article will be updated as more information becomes available.

Keep in mind that some of the posts below have been either translated by a third party or by the author and may not be exactly correct.

Note: “Master” should actually be translated as “Summoner” here.

Translated from the above video:

The damage of the abilities of Inferno burns the ground under the objective and inflicts a percentage of the damage of said ability before the mitigation as magic damage during 5 seconds. 3- 80%; 6-150%; 9-250%.

Diana 2 cost, Infernal Assassin,
Flamefall: Diana creates three orbs that rotate around her and explode when she hits an enemy, infiltrating 60/100/140 magic damage. In addition, Diana generates a shield that lasts 3 seconds and absorbs the next 150/250/350 of damage that she receives.

Forest: (3) At the beginning of the round, a random Forest champion clones themselves. (translation by u/BKSnitch)

[ENG] : Azir summons a Sand Soldier for 6 seconds. Whenever Azir attacks, Sand Soldiers attack too. They damage enemies ‘in a line’ pic.twitter.com/udxKJRl2GB

Translations of the above images can be seen below:

Live flash: Zed creates a clone identical to him behind his current target. This clone can also conjure up a flash, and inherit the items, attributes, and current life of Zed.

Ethereal chains: LeBlanc launches an ethereal current toward a random enemy, inflicting 200/450/700 damage and stunning them for 1.5s after a brief interval.

Translations from the above images:

Poison champions add neurotoxin when they cause harm. this increases the mana cost of the target by 50%.
Poison trail: Singed leave poison behind, wherever he goes. If an enemy moves in, it is poisoned and suffers 400/800/1200 damage over 4 seconds.
Spray and pray: Twitch gains unlimited range for 9 seconds and + 100/125/150% attack damage. During this period, all his attacks fly the maximum distance and pierced each enemy in their trajectory. Hit effects are also drawn.

here’s the official champion cards used in the reveal 🙂 pic.twitter.com/v40Srvf62R

Below is a translation of the above images:

Inborn skill: Berserkers jump to the nearest enemy. The berserkers have the chance to patch up units in front of them and deal 100% frontal area damage to them. 3 40% chance 6 80% chance.

Umbral blades: Passive – every third hit of Nocturnes is strengthened and inflicts damage on all nearby enemies, and also restores his health in the amount of 75/100/125% of the inflicted damage. 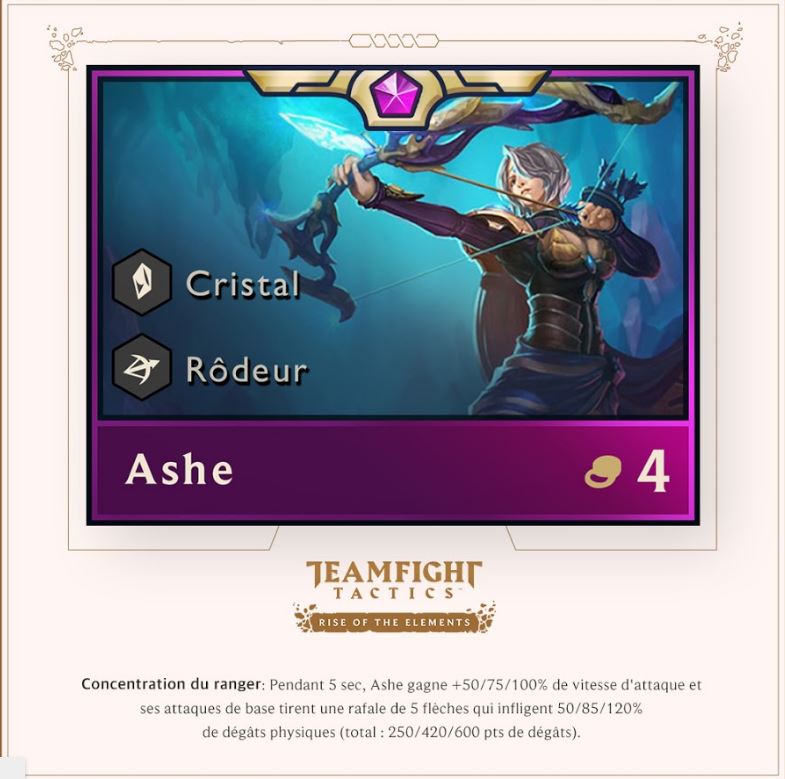 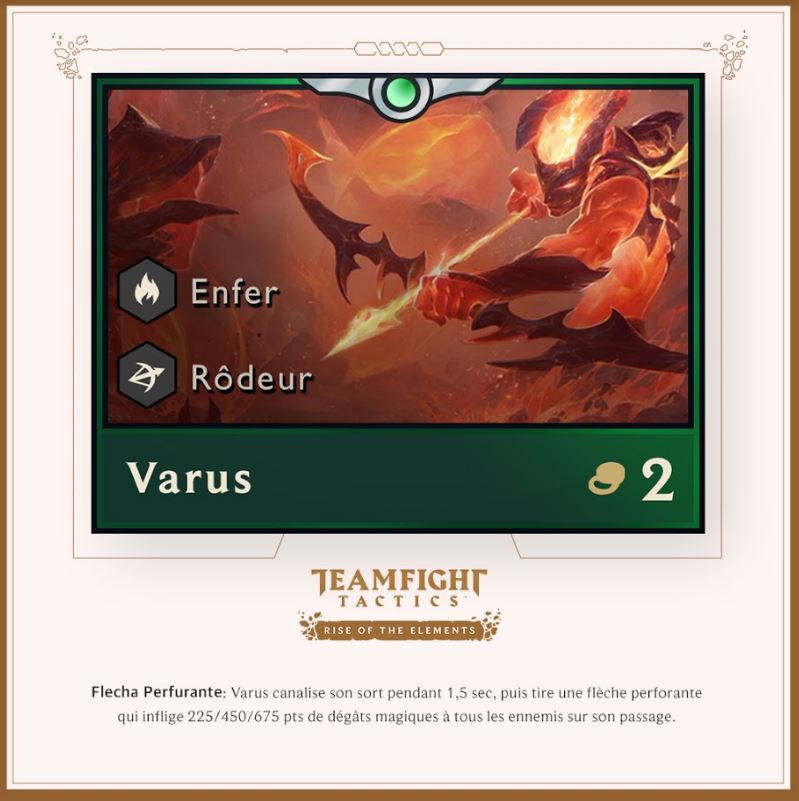 Piecing Arrow: Varus channels his spell for 1.5 sec, then draws a piercing arrow that deals 225/450/675 magic damage to all enemies in his path. 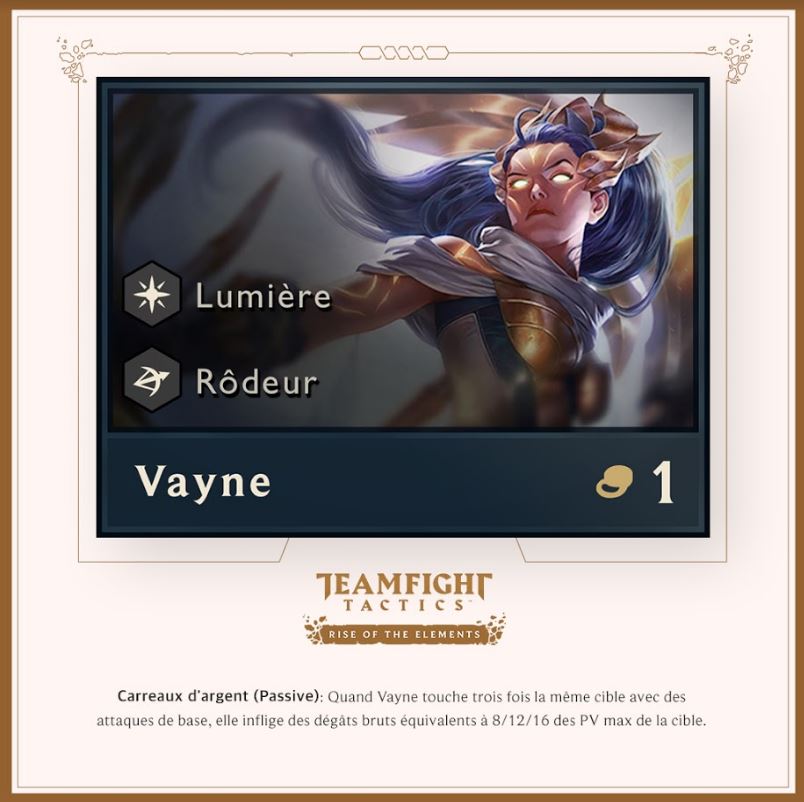 Silver Bolts (Passive): when Vayne hits the same target three times with basic attackes it inflicts damage equivalent to 8/12/16% of the target’s HP.

Malphite: Uncontrollable Force (R): Malphite advances toward a random enemy, dealing 125/200/275 damage and knocking all nearby enemies into the air, stunning them for 2 / 2.5 / 3s.

Mountain (2) At the start of combat, a random ally gains a 1500 stone shield.

Taliyah (w): Seismic Push: Taliyah causes the ground to rise under the enemy with the most Mana, inflicting 150/325/500 magic damage and throwing it toward her (if she is a ranged champion) or away from her. (if you are a melee champion).

Ornn (w): Electrifying Breath: Ornn unleashes lightning bolts on a cone in front of him, dealing 100/200/300 magic damage to all enemies hit and increasing the critical strike chance by 20% for 4s.

As a reminder, this piece will be continuously updated as more news surrounding TFT’s Set 2 is released throughout today, October 21. Once news is officially confirmed tomorrow, stay tuned at The Game Haus for an official announcement.