The first real tier list of the new set is upon us. With the first week over and done and the B-Patch in full swing, the meta has finally started to settle down. Eight different comps make up this week’s tier list. Here is the TFT 11.2 patch Tier List/Meta Snapshot.

S-Tier: Will top 4 almost always/ Can win the lobby

For the first week of the set, this comp was beyond broken. It really was in a tier of its own but with the recent B-Patch the comp was taken down a few notches. Regardless, Xayah/Asol is still one of the best comps in the game. The comp runs a very strong one-two punch with Xayah and Asol. Xayah is one of the premier carries in the game that has the rare ability to deal a lot of damage while also surviving for a long time thanks to her ability making her invulnerable. Hand of Justice is disgusting on her as she can deal insane damage, go invulnerable, and heal back to full health on every cast.

Asol is there to deal with problem threats that Xayah cant reach. Asol has one of the strongest burst abilities in TFT history with the ability to delete any backline carry with ease. Both of these carries benefit greatly from the Elderwood trait. Xayah is in the trait and will naturally gain all the tanky stats the trait provides while Asol fits perfectly alongside Lulu and Veigar as the comps much needed third Mage. This comp is also very flexible as players can push for five mages to make Asol the primary carry or go for a more Executioner or Keeper variant and make Xayah the primary carry. Spatulas are also very strong in this comp especially the Elderwood one on Asol.

The Warlord comp has very quietly risen to the top of the tier list. The comp isn’t going to turn heads with their very powerful uncapped boards but they will provide a very strong and easy to hit board that can hang with the best of them.

The primary carry in this comp is usually going to be Katarina. A Katarina 3* will absolutely shred any backline carry with ease even in the late game. The goal is to make sure Katarina can cast quickly and safely. Items like Quicksilver Sash and Gunblade are pretty much mandatory on her. Unlike in previous iterations, Katarina has some legit backup with Tryndamere being a good carry option as well. He especially pairs well in the standard comp as Pyke, a unit players already run with to boost Katarina because of the Assassin trait, is also a Slayer for Tryndamere.

But the carry potential doesn’t stop there. Units that usually would not be able to carry are able to in this comp due to the Warlord trait pumping out insane stats for all units in the synergy. Units like Vi and J4 are able to provide impact in the late game and at 3* can even be a carry option. Even Nidalee is seeing some spotlight too. The Warlord spat is one of the best in the game and can turn any legendary unit late game into a win condition.

A Tier: Likely Top 4/Can win if optimally built

Diana may have lost the Moonlight trait but she’s still an insanely powerful option when it comes to a reroll comp carry. In place of Moonlight, Diana gained the Spirit trait. In this new version of Diana Reroll, the goal is to throw in the four Spirit synergy as well as four or six Assassins. The beauty of this comp is that it doesn’t matter what Chosen Diana a player sees, both are able to carry games.

If a player hits the Assassin Diana Chosen, then it’s possible to have six Assassin and four Spirit in without the use of a Spatula item. This is great as Diana is able to do max damage and still have max attack speed. Because of this, the optimal build includes items like Infinity Edge, Runaans Hurricane, and Titan’s Resolve. Healing items like Gunblade and HoJ are good too.

If a player hits the Spirit Chosen then hitting the six Assassin synergy isn’t possible but it doesn’t require a player to throw in a useless spirit synergy bot to max out the Spirit trait. Even though the damage might not be maximized in this version, it’s still very strong and instead of more damage, players can opt to play some legendary units like Yone or fit in synergies like Mystic and Vanguard. However, an Assassin spat actually makes this version better as players can hit Six Assassins and Four Spirit in one less unit than the Chosen Assassin version. Because of that, this version allows for more flexibility. Also Kindred with an Assassin spat is low-key busted.

Speaking of Spirit, the best comp that can actually abuse the spirit trait isn’t Diana it’s Zed. Zed is just as much of a menace in set 4.5 as he was in set 4. It’s still the same story. Throw in Zed, give him a ton of attack speed items, max out on the Spirit synergy, and let him tear through any and all comps despite only being a tier two unit. However, this version of Zed is arguably better than the Shade version.

In set 4.5 Zed dropped the Shade trait and picked up the Slayer trait. The Slayer trait gives all Slayer units built-in Life steal and bonus damage depending on the missing health of them and their targets. Zed may not be able to drop aggro anymore but he does more raw damage now which goes very well with the Spirit synergy.

The jury is out on whether actually maximizing on Spirit units and just going for the four Ninja package is the best version. But one thing is certain, both are good and both are able to give Zed the support he needs to win pretty much any lobby as long as Zed is the Chosen unit. 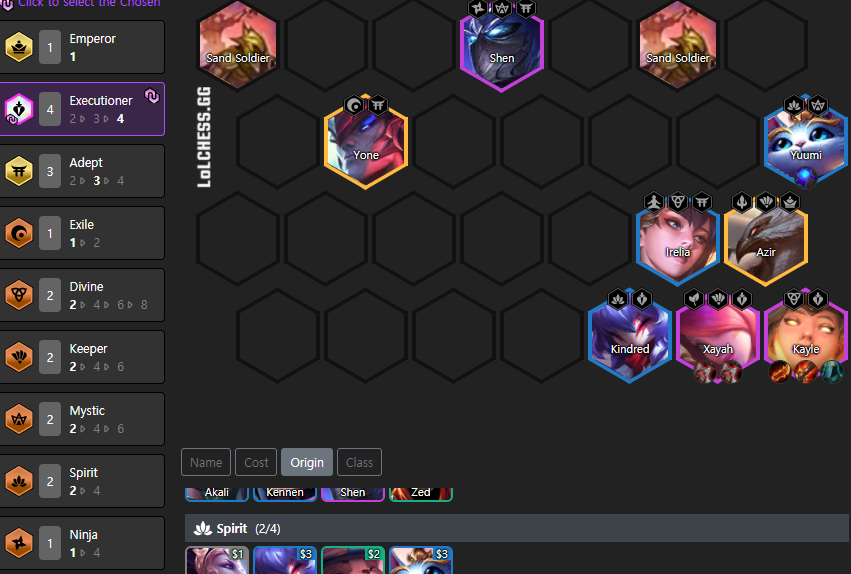 When Kayle first got announced that she was rejoining TFT in set 4.5, fear struck veteran players as flashbacks to her set 3 version arose. She has the same exact ability as her set 3 self and she also has a similar version of Valkyrie with Executioner. However, she doesn’t have the Blademaster trait so her downfall is her attack speed. With that said, there are ways to pump her attack speed and when she is able to get online in a fight, there really is no counter. If players can hit an executioner chosen with a couple of Zeke’s to buff her, Kayle can destroy any lobby

The PBE’s most infamous comp in testing before the new set hit live servers. Olaf is a shell of his former PBE self. He’s still a fantastic carry option but he does need a little bit of help. To be able to pop off consistently he’s going to need some great items. Deathblade, Hurricane, and RFC are most likely his best in slot items. If a player hits these items and surround him with a good frontline and some Mystic units to prevent him from getting one shot while in his berserk form, he can do some serious damage to any lobby.

A broken comp on the PBE, 8 Brawler Shyvana carry is still pretty scary in the current metagame. Brawlers now come packed with extra health AND extra AD depending on the number of Brawlers on the board. The comps primary carry is 3* Shyvana with a 3* Nunu cleaning up messes. However, even with both of these units pulling huge weight, players will most likely still need a 2* Sett to win lobbies.

One of the up and coming comps in the PBE but hasn’t really done very well on live servers. This comp is one good Talon buff from being broken and in its current state it’s still very much playable. Thanks to the Syphoner trait, Talon no longer needs a healing item so he is able to go full damage.

A comp that I have “created”. It may be a comp some people have been playing prior to me playing it though. The comp uses a Chosen Fiora Duelist to carry super hard early and mid game while being an insanely powerful tank and CC unit in the late game.

The comp is called 4/4/4 as it fits in four Duelists, four Divine, and four Enlightened. Besides Fiora, the two other duelists are Jax and Lee Sin who also double up as Divine units. Irelia is both a Divine and Enlightened that helps out Fiora too. Morgana and Janna are the other two Enlightened units. Morgana provides the Syphoner bonus when paired with Nasus who is the fourth and final Divine unit. To round out the 8 unit comp, Shen pairs with Janna for Mystic as well as Irelia for Adept. This eight-unit comp provides perfect synergies down the board. Yone extends the perfect synergies on level 9 as well.

This comp is very strong early and mid-game. Damage falls off late but Lee Sin and 3* Jax along with Morgana can deal enough damage to whittle down opponents especially with Yone shredded defenses.  Guide coming out soon.

The Past, Present, and Branding: How Emotes are the Soul of the Seoul Dynasty Discord

[…] the meta might be in a very good spot or a very bad spot. One thing is certain, there are a ton of viable comps but at the cost of most of them being reroll comps. Riot must think the meta is in a good spot […]