Takeaways From The Copa America 2016

This year’s 2016 Copa America Centenario ended the same way as last year’s; Chile outlasted Argentina in a penalty shootout to win the Final. I never enjoy penalty shootouts, because it’s as close as it gets in sports to deciding the game on a coin flip, since anything can happen in penalties. However, I feel that this tournament gave fans, critics and teams quite a few takeaways for their brains to digest.

The United States aren’t there yet

The hosts reached their goal, set by coach Jurgen Klinnsman, of a semifinal appearance, but couldn’t stretch further as Argentina swatted away any hopes of reaching the final. Argentina smothered American players with tenacious and quick pressure, forcing the US into costly turnovers and fouls. The USA proceeded to lose a tightly contested third place match 1-0 against Colombia, a team they lost to in group play 2-0. The Yanks can hold their heads high as there were some strides in progress in reaching the level they want to be at. Among the younger group of Americans making their senior team debut in a major tournament (a group that included Portland Timbers talisman Darlington Nagbe and Borussia Dortmund wunderkind Christian Pulisic), it was Bobby Wood, who recently signed with Bundesliga side Hamburg, that drew much attention and praise with his performances. Wood, who was suspended for the semifinal against Argentina, played with quality and intensity in every match he was a part of, forcing defenses to respect his speed and pace to help setup his team for goals and even nabbing one for himself. There is much to look forward to with this younger group of players.

Coming into the tournament, Mexico were viewed as favorites to challenge the likes of Argentina and Brazil. Then a 7-0 loss in the quarterfinal to Chile happened. This was most likely El Tri’s most humiliating defeat in their history and gave the players, coach and federation a lot to ponder, but the most puzzling part about that loss is Chile practically ran up the score up on a team that looked to have given up and stopped playing with a sense of pride or dignity; in the FIFA video game terms, they would’ve “rage quit”. I have a friend or two who are of Mexican decent, and I have noticed that Mexicans have great sense of pride for their heritage, culture and nation, and even I felt sorry for their fans as they had to watch their team get dominated and mentally crushed by the Chileans. Surely, out of the ashes of this meltdown, El Tri will find motivation through this devastating defeat to perform with more passion and pride even in the face of adversity when they travel to Russia in 2018 for the World Cup. 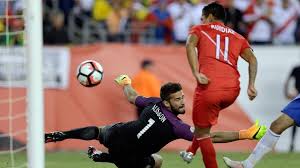 As a heavyweight in this or any part of the world, expectations are always high for the always talented Brazilians. Unfortunately, they were robbed of a chance to reach the quarterfinal by a referee who awarded Peru a goal that was an illegal handball in the last game of group play. That being said, Brazil were without their sensation and face, Neymar, who opted to play in the Olympics in Rio over the Copa (a decision that was forced on him by his club team, Barcelona), and their fans will be quick to remind doubters of his absence. I would be quick to remind those fans that Neymar plays on the wing and doesn’t defend, so Brazil conceding goals should be their biggest concern heading into Rio and beyond.

Colombia went into the tournament with expectations similar to that of Chile; they had their stars and wanted to prove themselves against the big dogs in the Americas, Brazil and Argentina. James Rodriguez, the star that supernova-ed onto the international scene two years ago in Brazil, arrived at the Copa with something to prove after season with European champions Real Madrid, in which he saw little time under new manager and Real legend, Zinedine Zidane; James was fresh and hungry to raise his stock in hopes of either earning more playing time or convince a team to buy him from Real Madrid at a high price (2 goals and 1 assist for the tournament could be considered adequate enough to get transferred). Los Cafeteros lost in the semifinal to a red hot (pun intended) Chile squad 2-0, but salvaged the loss with a 1-0 win against the host nation to take third place in the tournament; a fair finish when looking at what teams were in the final.

After being tripped up at the beginning of the tournament, Chile avenged their opening loss to the team that handed it to them, Argentina. The defending champions retained their title the same way they won it last year; they didn’t flinch in penalties. The feisty Rojas validated their rise into the conversation as one of the greatest teams in the world and earned the respect of many a football fan. While Chile’s style of play, like other South American countries, differs greatly from European powerhouses like Germany, Italy or Spain, they know how to do the one thing those countries can do: win on the big stage. Arturo Vidal and Alexis Sanchez will go down on their national team as two of the greatest leaders their team has ever had as they look to push this momentum into the World Cup in Russia.

What is there to talk about with La Albiceleste after this tournament? The team seems unable to grab an international title after 3 straight finals, their corrupt federation in charge of the team is facing a possible ban and being disqualified from international competition (World Cup included). In addition to this, half of their team’s best players, including Lionel Messi, are claiming to retire from the national team. Phew, life sure is easy for Argentines. In all seriousness, I feel that this team, being made up of some of the greatest players in the world (pre-Copa Final), is becoming the new “Cleveland” with Lionel Messi the new “LeBron James” (pre-title), despite all his accolades at the club level. Argentina losing at the big tournaments at this point is looking like the equivalent to the USA losing in basketball in three consecutive Olympics; they really shouldn’t despite other countries’ talent. With Messi declaring his retirement from the national team, the Argentinian media should not be so hard on him, since it is not entirely his fault that the team can’t win (although a missed penalty in the shootout against Chile on Sunday certainly didn’t help his cause); Messi is a once in a lifetime talent that is just one of eleven players on a team. I felt Messi had played to his absolute limit against Chile, but it wasn’t enough. Gonzolo Higuain’s miss in the first half wasn’t enough. Argentina will have to sort out their issues from within if they want to keep their talented team together and still contend for the World Cup in Russia