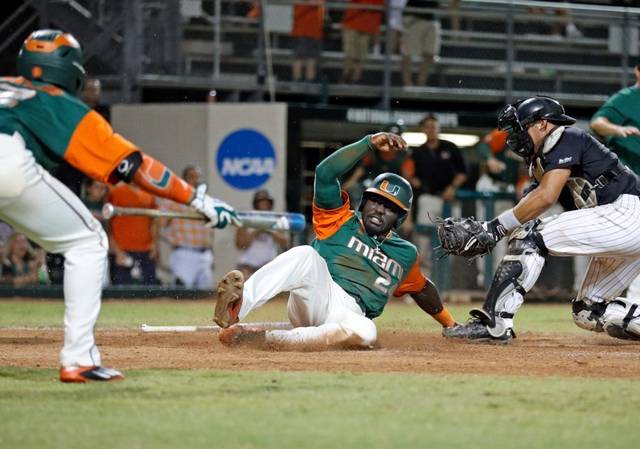 For the second consecutive year, these bitter rivals will meet with a spot in Omaha on the line. The Gators have had the edge lately, eliminating the Seminoles last season and sweeping a three game series this year. They also have plenty of momentum after blowing out Georgia Tech in the regional final. In case this team didn’t look dangerous enough, they are now fully healthy as first baseman Peter Alonso returned from a broken hand to hit 8-14 with three home runs in the regional. Florida St rolled through the Tallahassee Regional, capping it off with an 18-6 blowout of South Alabama. The Noles have one of the hottest, most dynamic offenses in the country, led by Dylan Busby who is batting .500 with 6 home runs in the last 7 games. This certainly has the potential to be a great series with two elite offenses, but I think Logan Shore and AJ Puk on the mound will be the difference, and the Gators will prevail.

Louisville has been a complete juggernaut at home, now with a 36-1 record after three easy wins over Western Michigan, Ohio St. and Wright St. They head into their fourth consecutive super regional with tons of confidence, especially in starting pitchers Kyle Funkhouser and Brendan McKay, who only gave up a combined one run in the regional. They will be a tough test for the young Gauchos, who appear to have put it all together after a rocky finish to the regular season. UCSB will need a strong start from ace Shane Bieber, who shut out Washington in game 1 to have a shot against Louisville’s top 10 offense. The Gauchos pitching should give them a chance, but Louisville has a much better offense, and when you add in the home field advantage, the Cardinals should advance.

This is a matchup of ACC schools, but that’s about all they have in common. The Hurricanes are amongst the baseball blue bloods, with a four National Titles and an NCAA Tournament streak that dates back to 1973, while the Eagles haven’t been to Omaha since 1967, and before this season hadn’t had a winning record since 2010. Miami got a test in their regional, but defeated Long Beach St in an 8-7 walk off win. Miami didn’t get their usual production from star Zack Collins, who had more strikeouts than hits in the regional, but saw Willie Abreu and Jacob Heyward (Jason’s brother) step up. Boston College is probably the closest thing to a Cinderella in this year’s tournament, but after beating Utah and Tulane twice, are done flying under the radar. They’ll need their pitching to stay hot, as the Eagles only gave up eight runs in three games. However, Miami is on another level from the teams BC eliminated, and will likely have too much offensive firepower.

An in-state battle between the past and the present in the Big 12, TCU is looking to make it back to back super regional wins over the Aggies. However, this time, the road to Omaha will have to go through College Station, where A&M is coming off of an easy regional win, having blown out Binghamton, Minnesota and Wake Forest. They scored 30 runs in the last two games, in large part because of Boomer White, a TCU transfer, who is batting .398 on the year. His old team is also high on confidence, entering their third consecutive super regional. Coach Jim Schlossnagle has this team playing as well as anyone in the country, after three wins over Oral Roberts, Arizona St and Gonzaga. The Frogs dominated all three aspects of the game, hitting .318, posting a 1.33 ERA and not committing a single error in the regional. Texas A&M can get hot at the plate, especially at home, but I like TCU’s well-rounded and experienced team to advance.

Texas Tech survived a scare against Dallas Baptist in the regional final, largely due to Hayden Howard’s work out of the bullpen, and three clutch RBIs from Orlando Garcia. The bullpen also pitched four shutout innings earlier in the weekend, which allowed Tech to come back from a 3-1 deficit to defeat New Mexico. They will meet the East Carolina Pirates, the last remaining team from North Carolina, who are arguably the most surprising team still in the field. The Pirates stunned defending National Champs Virginia on a walk off in the second game, before taking care of William & Mary to advance. The Pirates offense was on full display, as they scored at least eight runs in all three wins. The Pirates proved that they can play with anyone in the country, but I think Texas Tech in Lubbock will be too much for them.

Mississippi St. may have come from nowhere to win the SEC title, but they are certainly in the national spotlight now. Their improved pitching was on full display in the regional final win over Louisiana Tech, where State shut out the other Bulldogs, allowing only two hits while striking out 14. They also have the advantage of playing at one of the most hostile venues, where they boast the biggest crowd in the country, and the cowbells don’t stop all game. The lone representatives of the Pac 12, Arizona came out of the losers bracket to knock off Lafayette twice and advance. The Wildcats showed off their pitching, particularly their bullpen, which the Cajuns had no success against. This pitching should be enough to keep things interesting, but the Bulldogs are a better team, and should take it at home.

It was a great weekend for Gamecocks fans, as the team advanced through the Columbia Regional, and watched archrival Clemson get knocked out, opening the door to host a super regional. Carolina had a rough start, losing to Rhode Island and winning ugly against Duke, but turned it around to outscore their final three opponents by a combined 43-8. Oklahoma St. was the only team to knock off a national seed, and absolutely dominated Clemson twice to advance. The Cowboys hit .385 in the regional, and never trailed at any point. They come in hot, and also have the advantage of staying in South Carolina for an additional week, cutting out much of the travel. This is probably the most even match-up of the round, but I think Oklahoma St will score just enough to get it done.

After a series of rain delays, on Tuesday LSU became the fifth SEC team to qualify for super regionals. The Tigers got a great performance from Jared Poche, who threw six scoreless innings out of the bullpen just three days after starting against Utah Valley. The bats came alive, spurred by a go ahead home run from Greg Deichmann, and LSU was able to knock off Rice. This weekend, they will get a visit from Coastal Carolina, fresh off upsetting NC State in the Raleigh Regional. The Chants loaded the bases with one out in the ninth down by two, but because of a bizarre rain delay, had to finish off the game the next day. Coastal eventually took the lead, and held on thanks to All-American closer Mike Morrison. The Chanticleers are a team that simply finds ways to win, and has some of the best pitching in the country. However, LSU has pitching to match and should advance at home.