The Gauchos shocked the college baseball landscape with two straight wins over Louisville, a team with only one home loss until then. They lean heavily on their pitching, especially ace Shane Bieber, who held Washington and Louisville to a combined three runs on 14.1 innings pitched. The bullpen is also solid, anchored by Kyle Nelson who has nine saves with a 2.02 ERA for the year. To take home the title, UCSB will need to see more of the offense they showed in the ninth inning against Louisville in game 2. They loaded the bases against Zach Burdi, one of the best pitchers in the country, and catcher Sam “no relation to Seth” Cohen launched a changeup over the right field wall. It sent the Gauchos to Omaha for the first time, and if this offense shows up there, UCSB could continue their run.

The Cowboys have been as dominant as any team in the tournament, winning all five games without trailing once. Their pitching was on full display, giving up just one run in each game to sweep South Carolina. The scary thing for the rest of Omaha is that they didn’t even have to use all of their depth. Freshman Jensen Elliott, who shut down Clemson in the regional final, went unused in Columbia, but he could have a major impact if the Cowboys go deep. The offense will need to get continued productivity from Donnie Walton, JR Davis and Conor Costello, but there is no doubt that Oklahoma St is as hot as any team in the country, and will be a very tough out in Omaha.

Miami is making their 25th appearance in the College World Series, and is looking to add championship #5 to the trophy case. They have as good of an offense as any, with Zack Collins, Brandon Lopez, Johnny Ruiz and Carl Chester all batting above .340.  They also get serious power from Edgar Michelangeli, which Boston College found out about the hard way. They lead the nation in fielding percentage, at .983, and have a pair of solid lefties at the top of their rotation in Michael Mediavilla and Danny Garcia. The Hurricanes had two tough games against Long Beach St, and lost one to Boston College in the super regional, but on paper this team is absolutely stacked with very few holes. If they put it all together, the Canes are one of the favorites here in Omaha.

The second West Coast team in Omaha, Arizona will look to have similar results as in 2012, when they won the National Championship. The Wildcats don’t light up the stat sheet, but are a gritty team that knows how to get on base when it counts, as they did in the comeback win over Mississippi St. They also feature plenty of speed, with seven starters who each have at least seven steals, and a 71% success rate on stolen bases. They also have plenty of arms, with five pitchers capable of providing a quality start, including Bobby Dalbec, a two-way player who pitched well in the super regional. One of the question marks going into the Tournament was a lack of experience – no one on this team had played in the postseason before – but after winning in Lafayette and Starkville, it is time to put those concerns to rest. Arizona is a tough, blue collar team who has proven to shine in big games. They certainly have the skills and the depth to continue shining.

The number one overall team had a bit of a scare, losing game 1 to rival Florida St, but rallied to take the series. The Gators have a top 25 offense, and it was rolling against the Seminoles. Peter Alonso, a second round pick by the Mets, has made a big difference in both the quality and the depth of the lineup. He and JJ Schwarz provide power for this offense that few teams can match. The rotation is also elite, and got an especially great performance from Logan Shore in the super regional. When AJ Puck and Nick Faedo are also pitching at a high level, the Gators are very difficult to beat. Florida was the number one overall seed for a reason, and might be the best team on paper. They will need more consistency this week in Omaha, but have a great chance to win their first ever National Championship.

Coastal Carolina might seem like a Cinderella to the casual fan, but the Chanticleers have become a college baseball powerhouse. Coastal won their third regional in the last eight years, and finally broke through to Omaha this time. With this team, any lead they can get will most likely be held by relievers Mike Morrison and Bobby Holmes. Morrison is probably the best closer in the country with a 1.06 ERA, and showed the ability to pitch multiple innings in wins over NC State and LSU. Their offense is also very dynamic, led by Michael Paez and Connor Owings. The Chants lead the nation in home runs with 94, and can put runs up in a hurry. They are a veteran team that excels in big situations, and that is a very dangerous thing to face in Omaha. 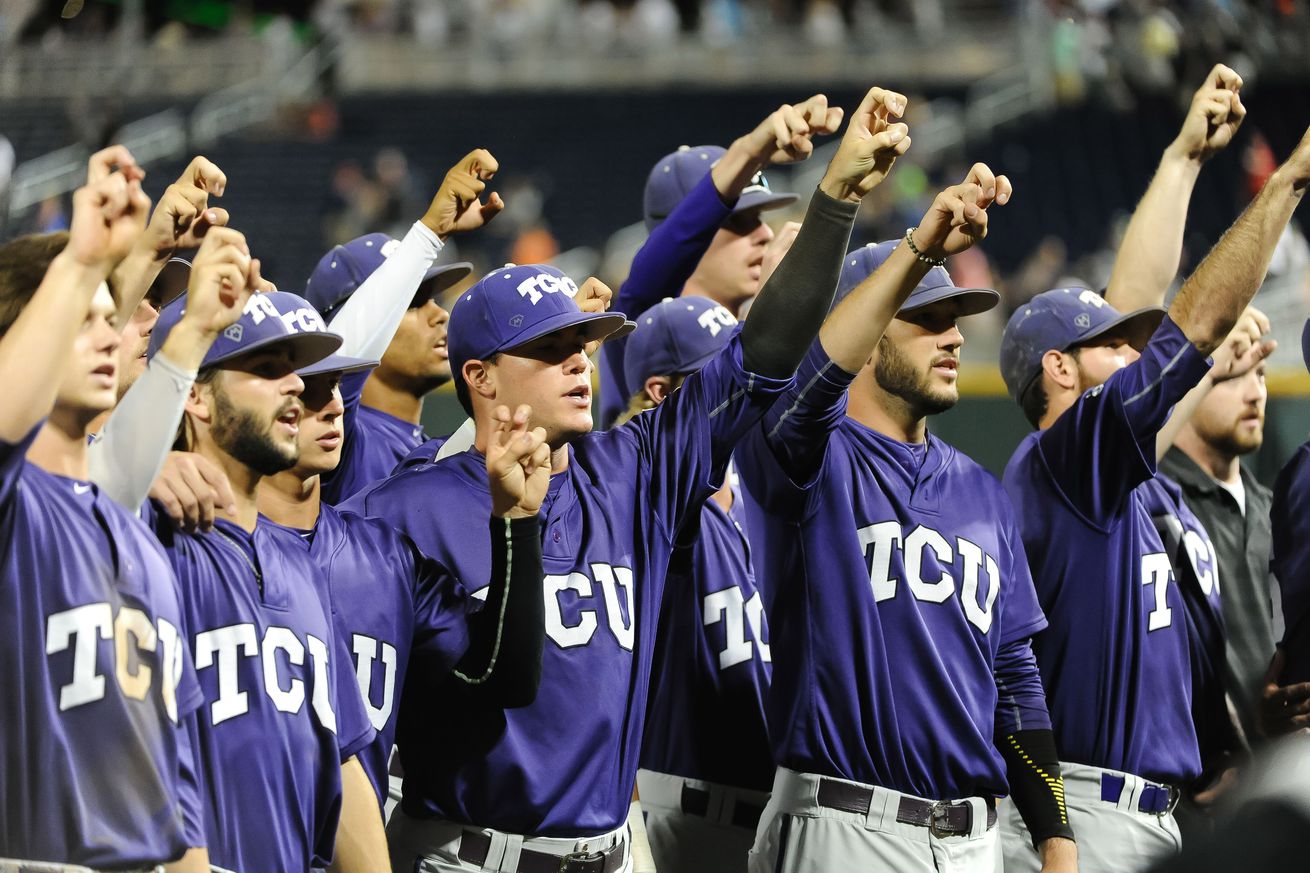 Make it three consecutive College World Series appearances for TCU, who advanced with a second straight win over Texas A&M in the super regionals. They hope to breakthrough and win their first title this year, and can certainly do it with star freshman Luken Baker. The Horned Frogs bat .304 as a team, and have begun to show quite a bit of power. TCU also features a loaded pitching staff, where their depth was on display against Texas A&M. Brian Howard, number three in the rotation, pitched seven innings with no earned runs against an explosive Aggies offense. The Frogs are a fairly young team, but they do have quite a few players with Omaha experience, and they just got passed a tough hurdle in College Station. They have the depth and talent to make a run in Omaha this year.

Texas Tech has to feel confident as they ran away with a Big 12 title in a conference that sent three teams to Omaha. They survived a scare from East Carolina in the super regional, but showed why they earned a national seed with an 11-0 beatdown in game 3. Offensively, they are led by Tanner Gardner, who has a .485 on base percentage, and Eric Gutierrez, who bats .326 with a team leading 12 home runs. The pitching staff is young, but showed plenty of talent throughout the season. Erikson Lanning pitched seven shutout innings in the decisive win over East Carolina. They also have a deep bullpen with both Hayden Howard and Robert Dugger capable of pitching multiple innings in relief. This team might be young, but they didn’t win the Big 12 by accident. They have a very dynamic offense, and if their pitching holds up, Tech could absolutely win the whole thing.

The Verdict: Obviously, all eight teams proved they are capable of beating anyone. With that said, I like the Miami Hurricanes, particularly because of their explosive offense. They are well rounded and experienced, and I think they bring another trophy to South Beach.