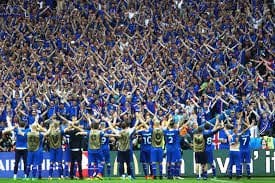 At the close, there are questions answered as well as questions asked. There are winners and losers, overachievers and underachievers, overrated and underrated teams, players that showed up for their country and those who didn’t. Let’s get right into it:

Gareth Bale (Wales). Leads his country to their first ever semifinal appearance and, if not for an Aaron Ramsey suspension, might’ve made it to the final to face France.

Antoine Greizmann (France). Despite France losing in the Final, Antoine was the best player of the whole tournament, even if the coach didn’t put him in the starting eleven. He proved to us why he is so valued at Atletico Madrid.

Eder (Portugal). Had an awful year at the club level and came on as a substitute in the final to be the lone striker for a Portugal team hanging on for a penalty shootout, and scores the game winning goal in extra time to give Portugal its first major title. He won it for Portugal, he’s a winner.

Antonio Conte (Italy). The coach taught the soccer world a lesson in why no one should ever ignore the Italians. Even though they lost to Germany in penalties, Italy never looked out of it throughout the tournament.

Zlatan Ibrahimovic (Sweden). Known as the “Super Swede” and probably the greatest Swede to ever play soccer, went goalless in the 3 games Sweden played in group play in which they didn’t make it out of the group. This tournament would be his last with the national team as he focuses the last years of his career at the club level with his new club Manchester United.

Cristiano Ronaldo (Portugal). Going into the tournament as the best player, he had a rough tournament by his standards (3 goals and 1 assist in 7 games). This tournament made me question whether or not 31 year old Ronaldo was showing signs of being on the decline and for that reason alone was disappointing.

Wayne Rooney (England). I could pick many English players, but I have to go with the captain as the most disappointing; chosen to lead this young and talented group into a new era of English football. Well, he did just that. Rooney lead England to rock bottom after losing to Iceland in humiliating fashion.

Thomas Muller (Germany). Another Euro gone, another Euro where Muller has gone without a goal, which is crazy considering the rate at which he scores in World Cups.

Iceland. Everyone loves an underdog and Iceland was definitely an underdog at the beginning of the tournament. They made it all the way to the final 8, putting the English FA in disarray, before losing to the hosts. They were fun to watch.

Wales. On the back of Gareth Bale was how this team was going to have a chance to advance… or maybe not entirely the case. While Bale was the leader, Wales played like a team and shocked the world by making it to the semifinal after upsetting tournament dark horse or favorite (depending who you ask), and “golden generation”, Belgium.

Belgium. Disappointing only begins to describe how this tournament went for Belgium. This team had so much talent even without injured captain and defender Vincent Kompany, it was surprising that the team, even though they made it to the round of eight, was not meshing well under coach Wilmots.

England. So much talent, so much promise, and so much… nothing. England was easily one of the more talented teams in the competition, but they didn’t have any mental toughness to come with that talent. They lacked a will to win and it showed when tournament sweethearts Iceland sent them home at the beginning of the knockout rounds.

Croatia. If not for the hard-to-watch style that Portugal played with and the late extra time goal from Quaresma in the round of 16, Croatia was my pick to get to the final to face either Germany or France. This team played very well and did not like being taken lightly as Spain found out when they lost the group to Croatia in the final game of group play. The team worked well, communicated, and proved to be very formidable, especially in the midfield.

The European Championship is held every 4 years. This year, it was hosted by France. And this year, it introduced a new 24 team format, which allowed for the best of four teams that placed 3rd in their group to advance to the knockout rounds in the tournament. One of the teams that made it to the knockout round was Portugal, the eventual champions. Portugal had drawn in all 3 of their group play games, culminating in 3 points. Under the previous rules, Portugal would not have even made the knockout rounds. They played a boring style of soccer; interrupting the flow of play by fouling, hopefully not too dangerous to earn a card, and dare the opposing team to break them down. They didn’t want any sort of counter attack to unload on them and put pressure on defenders like Pepe to be perfect on the closeout. Portugal did not look like the champions of Europe, yet they are. They failed to win any of their matches in under 90 min until the semifinal against Wales. These Euros are comparable to when Greece won in 2004; they just looked like they shouldn’t have been champions, but they raised the trophy after the final whistle. I am not downplaying Portugal’s run, but I will say the quality teams were on the other side of the bracket (Germany, France, Italy, etc.) so they did have a kind run having to not face Belgium. But they won. They beat the host nation. With the Euros now over, Portugal as champion, France in heartbreak, myself and soccer fans worldwide can now look seriously at the transfer rumor mill.