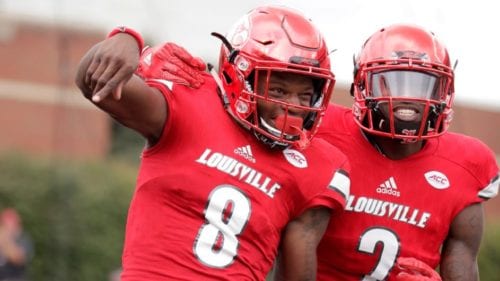 Week three produced some great football for fans nationwide. The combination of non-conference and conference games made the weekend great. Big programs faced off against each other, and rivalries were renewed. Here are five takeaways from the weekend’s action:

1. Louisville/Lamar Jackson are for real.

Louisville did not just beat Florida State, they dismantled them. The Cardinals had played manageable competition in the first two weeks, but had their first test this week against a very talented Seminole team. They still have big games against Clemson and Houston, but they look like they are capable of making the College Football Playoff and possibly doing some damage if they get there.

The man leading the Heisman Trophy race was not even in consideration last year. Lamar Jackson put up ridiculous numbers against the poor competition the first two games of the season. He had thirteen touchdowns by himself in those games. He added to his Heisman campaign, by totaling 362 yards and five touchdowns. His biggest accomplishment this weekend was Michael Vick tweeting and raving about him.

Lamar Jackson 5x better than what I was at V-Tech….Enough said!! #future

2. Dropping the ball before you reach the goal line isn’t cool.

The trend of dropping the ball as soon as you get into the end zone, or dropping it before you get there in most cases,is the dumbest thing a player can do. Do players really think it is cool to drop the ball that soon and possibly cost their team a crucial score? Even though I would hand the ball to the official and head to the sideline, college football does need some celebrating, but not in this fashion. With these incidents happening to Oklahoma and Cal this week, and Clemson last week, it has occurred too much to ignore. The upside of dropping the ball early is literally nothing, but the downside is a player looking dumb on national television. In the words of Coach Herman Boone from Remember the Titans would say, “Hold onto that ball Petey!”.

3. Talent is more important than schemes/Ohio State is talented.

Oklahoma’s backup quarterback Austin Kendall mentioned that he couldn’t wait to see the Sooners’ starting quarterback, Baker Mayfield, light up Ohio State’s basic defense. While it is easy to see that Ohio State’s defense doesn’t do anything mind boggling, they are still an excellent defense with a lot of talent. Their specialty this season has been intercepting passes and Mayfield fell victim to that, throwing two to the Buckeyes. The talent of Ohio State did a great job of slowing the Sooners’ offense. Maybe next time Kendall will think before he says something like this, when he isn’t the one who has to back it up.

4. North Dakota State is better than a lot of FBS teams.

North Dakota State has been a perennial powerhouse at the FCS level and have even beaten plenty of FBS teams. This season they took a step forward by traveling to Iowa and beating the thirteenth best team in the country. The Hawkeyes returned a lot of talent from last year’s team, who went to the Rose Bowl, and were expected to contend for the Big Ten again this season. The Bison just reload, as they have won five straight FCS National Championships, but they showed this week that they can compete well enough to be a solid FBS team. The School doesn’t seem to be considering a move to the FBS, they like dominating the FCS level, but are talented enough nonetheless.