The Houston Outlaws: The Good, The Bad…

All but four teams  now know where they are drafting. Teams are looking to rebuild and get to the playoffs for the seasons to come. Here is the latest 2018 NFL Mock Draft:

Rosen has had to carry UCLA this season and ended up having a successful season. He needed to have a good season to clear up any doubts about his shoulder injury his sophomore year. The Browns have a new GM, who has no allegiances to anyone on the roster, which means DeShone Kizer is likely done as quarterback.

The Giants still need a head coach, so it’s hard to figure out what they will do. Maybe Eli Manning can mentor Sam Darnold for a year. Darnold struggled this season with his decision-making which led to a lot of turnovers. He also has a flawed throwing motion. Some have Darnold much higher in mock drafts, but his decision-making won’t get too much better in the NFL.

Indianapolis also doesn’t have a coach yet, but most importantly don’t have Andrew Luck healthy. When he is back, the offense will figure itself out. They can improve the defense to make the team more complete when Luck comes back. Chubb is a great pass rusher who has 10 sacks in each of the past two seasons.

Barkley is one of the most complete running backs to ever come out of college and might be the best player in the entire class. The Browns tried to improve the defense in last year’s class, but now need to focus on the offense. With Rosen, a good offensive line and now Barkley, the offense should improve.

While Allen certainly has flaws in his decision-making and accuracy, he does have a strong arm and is athletic. John Elway went to Idaho to watch him in his bowl game personally. The Broncos have a solid roster, but just need a quarterback to lead the team.

The Jets had a better season than anyone expected and now just need a quarterback to take them to the next level. Some people are questioning whether Jackson can play quarterback, but he showed improved accuracy this season and is a dynamic playmaker. He should be given a shot to play the position in the NFL and the Jets could use his talents.

Tampa Bay’s defensive line isn’t as good as it once was and they need some pass rushing help. Key only played eight games this season and had four sacks, but has proven in the past to be a good speed rusher.

The Bears have some nice young pieces in Trubisky and Howard, but now need to get a weapon at wide receiver. Ridley is the best route-runner in the class and produces even without the best quarterback play.

Ward is the best cover corner in the draft. He had to really make his way this season, as he had to sit and wait his turn to get playing time. The 49ers got their defensive lineman and linebacker in the first round last year and can now get a good secondary player to go along with them.

Oakland really needs to improve the interior of their defensive line and their defense in general. Vea can play both defensive tackle and nose tackle, which is valuable. He has great size at 6’5″ and 340 pounds. 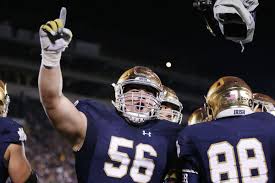 Adam Gase has said that Ryan Tannehill is the starting quarterback. There are other holes on the team, but they need to have better offensive line play if they are going to be successful. Nelson is one of the best players in the class and will be drafted early despite playing a position that doesn’t usually get talked about this soon.

The Bengals were able to go 7-9 with a terrible offensive line. They need help at just about every position and can start with tackles. They have taken tackles before in the first round, but they haven’t panned out. McGlinchey would’ve been a first round pick last year and the Bengals can get good value and fill a need with this pick.

Last draft, the Redskins got good value in Jonathan Allen and can do so again with Fitzpatrick. He likely fits in best as a safety in the NFL, but can also play corner. Fitzpatrick can play next to D.J. Swearinger next season.

Jackson turned into an All-American corner at Iowa this season and has shown the ability to make acrobatic interceptions. The Packers need to improve the secondary and make the defense better for when Aaron Rodgers gets the offense going again.

The Cardinals have to find a new quarterback now that Carson Palmer is retired. Baker has defied all the critics who have mentioned his size as a reason not to draft him. He can make all the throws and is athletic to avoid pass rushers.

The Ravens’ defense is really good, but the offense needs some work. Mike Wallace, Breshard Perriman and Jeremy Maclin aren’t cutting it for the Ravens. Kirk is dynamic when he has the ball in his hands and can play in the slot or on the outside.

James’ stock is falling, but teams will fall back in love with him again throughout the next few months leading to the draft. He is athletic, but doesn’t necessarily have a set position. The Chargers can use the help at safety and James would be a great addition.

Reports have come out that it will be tough for Cliff Avril to play football again and Michael Bennett has said that he doesn’t think he’ll be back in Seattle. Davenport isn’t a household name because he played at UTSA, but he’s a good pass rusherwho fills a need.

The Cowboys are seemingly always weak up the middle of their defense. Shutting down their opponents’ running game would allow them to control the clock like they love to do. Payne’s stats aren’t eye-popping, but he often gets double teamed.

Detroit hasn’t had a solid running game in Matthew Stafford’s tenure as quarterback. Some more balance on offense would make it even better. They may be able to achieve this if they improve the offensive line. Price has tons of experience at guard and center for Ohio State and will start right away.

Smith is the best linebacker in college football and does a little bit of everything well. His game is fueled by his speed. The Bills are thin at linebacker and Smith is a day one starter.

Davis is a lengthy corner for Auburn, who has withstood a lot of good SEC competition. The Bills took Tre’Davious White last year and will likely want to get another corner to pair with him.

Los Angeles has good inside pressure in Aaron Donald and Michael Brockers, but need better outside pass rushers. Hubbard will not only provide that, but is also one of the best run-stopping defensive ends in the class.

The Panthers signed Julius Peppers, but he won’t last much longer and they aren’t very deep at defensive end. Landry had a great 2016 season that put him on the map and followed it up with a solid season this year.

Johnathan Cyprien has been bad for the Titans this year, in one of their lone weak spots on the roster. Reid took a huge leap this season in terms of production and has put himself on the map for a first round selection.

Jackson has the potential to develop into a great cover corner. Atlanta needs another corner to pair with Desmond Trufant and should try to take one early.

The Saints need to plan for the end of Drew Brees’ career sooner rather than later. Not everyone likes Rudolph, but he has a lot of experience and quite possibly the best deep ball in the class.

Harrison is a good strong safety prospect, who plays physically. Despite being known for all of their great safeties throughout their history, the Steelers are very bad at the position right now.

Jacksonville has talented young receivers, but due to injury have been spread thin at the position. Sutton is a bigger receiver who has put up big numbers in the AAC. As a team with not too many needs, the Jaguars can afford to spend this pick on a receiver.

The Vikings’ offensive line is much better than last year, but can still be improved. With a good offense and defense, they don’t have too many needs. Brown has great size for an offensive tackle and his father played in the NFL.

Another team that doesn’t have too many needs is the Eagles. They could use another linebacker for depth and a future starter. Jefferson was a highly-touted recruit that hasn’t reached his potential yet.

The Patriots’ defense needs to be revamped. Edmunds is a linebacker who can do it all. He rushes the passer, covers and helps to stop the run.