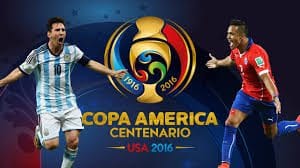 Last year on the 4th of July, Chile outlasted Argentina in the Copa America Final, by forcing the game into penalties, and won the shootout convincingly 4-1. Heading into that game, Argentina, once again the favorites, looked primed for their first international tournament win in two decades. The two sides also faced off at the beginning of the tournament in Group D with Argentina winning 2-1. Now, when you take into account the results of the last two competitive matches between these two, this final would be the tiebreaker and this time around, with both teams in the best form they could possibly be playing in, the match is no doubt expected to be an absolute slugfest even if the scoreboard doesn’t show it.

How they got there:

Argentina swept Group D, winning all 3 games and accumulating 9 points. This put them up against Venezuela in the quarterfinal round in which they won handedly 4-1. They then manhandled the host nation, the United States, in the semifinal 4-0, without even allowing them to get a shot off the whole 90 minutes.

Storyline heading into the final:

Messi has yet to lead Argentina to an international tournament win. As captain, he came very close in the 2014 World Cup, but lost to a loaded German team 1-0 and almost won the Copa America last year, but lost to a feisty Chilean team in penalties. As the best player in the world, a casual sports fan would think he has an international tournament title under his reign, but unfortunately he does not. Can Messi finally win one for his country?

Argentina walked away with a clean sheet in the semifinal against the US; they didn’t even concede a single shot. They pressured the US into making fast decisions with the ball and it forced the Americans into a panic and the Argentinian attack made them pay dearly. Now, Chile and the US are two completely different teams, but if Argentina can impose their type of tempo and pace on the game they can probably force Chile into a couple mistakes and hopefully, as Argentina did against the US, add the word “costly” to them. Chilean goalkeeper Claudio Bravo has been having a bad tournament and fortunately for him, he hasn’t had to do much in the knockout rounds; that will change on Sunday.

How they got there:

After rallying from their opening loss in the group stage to their Sunday adversaries, Chile won out, beating Panama and Bolivia to take runners up in the group. Chile then walked over Mexico in the quarterfinal, routing them with a humiliating 7-0 victory. Their semifinal performance held Colombia, a similarly built team, scoreless and all Chile needed was the first 10 minutes of the game to score the game’s two goals.

Storyline heading into the game:

Chile has been underrated for the past couple years in the big tournaments. In the 2014 World Cup, they nearly won their group, losing only to Holland, and knocked out defending World Cup champions, Spain. In the same World Cup, they nearly beat the host nation Brazil, but lost in penalties. They made up for the failure by beating Argentina in a penalty shootout to win the 2015 Copa America. The Chileans have been playing with such passion and pride for the last couple years in big moments and any fan can see it on their faces. Can Chile repeat as champions and wash away their group play loss to Argentina to cement themselves as force to be reckoned with in the next World Cup?

This should be a great game for Americans to watch, even if the United States isn’t one of the teams playing; two fast paced teams playing tenacious yet beautiful soccer. I predict the game to be back and forth with Argentina coming out on top 3-2 with the winning goal coming off the Argentine bench from Sergio Aguero in the second half.