Alvin Hidayat is your 2018 Collinsville Regional champion, winning it all with an unusual Mega Evolution and a familiar strategy. Hidayat has had a history of consistent Top Cut placings, including a 13th place finish in Dallas a couple weeks ago, but has never quite made it all the way until now. Hidayat’s unique team made a return appearance in Collinsville, and was able to complete the regional title run with a second go. Here’s all what went down at the 2018 Collinsville Regional Championships.

A different kind of team 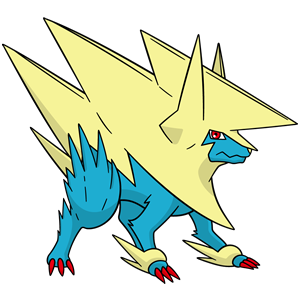 Alvin Hidayat’s team is non-standard for a number of reasons. Mega Manectric is a notable off-meta choice and you’d expect to see many Manectric players running a team similar to Louis Milich’s Manectric squad. Mega Manectric’s game in VGC 2018 is an offensive pivot that relies on it’s Intimidate ability plus the attack Snarl in order to lower the opponent’s stats while it switches in and out of battle with Volt Switch. Many Manectric teams like to use this strategy to make it much easier for Pokemon like Celesteela and Snorlax to win on their own. Mega Manectric made this possible for Hidayat, but also allowed for a more fun strategy to work.

Meet Choice Scarf Tapu Fini. This was a strategy Hidayat was known for using last year with Tapu Bulu and Kartana alongside Tapu Fini turning all of the opponent’s Pokemon into Water-types. Tapu Fini gets access to the move Soak that changes the target into a Water-type, making easier for Hidayat’s Kartana to pick up KO’s on pretty much anything with a super effective Leaf Blade. With Kartana’s naturally high speed and Tapu Fini’s Choice Scarf, this duo is surprisingly effective in overwhelming under-prepared opponents.

Hidayat’s finals opponent, Ashton Cox, wasn’t unprepared but the matchup sure was tough. Hidayat’s performance throughout Top Cut was dominant despite the finals set coming to three games. Hidayat claims that the victory came down to his reads, and after a misstep in game two, he was able to ascend back to his dominant form.

Now, I wouldn’t start expecting every Tapu Fini you see to be holding Choice Scarf, but if you see it paired with Kartana, I’d be cautious. I knew Mega Manectric had potential, and you just might start seeing it much more often.

Well, not surprisingly Mega Metagross remained the most popular Mega form in Collinsville, with two players in Top 8 using nearly identical teams. When I say “if you want to win, use Metagross” I wasn’t kidding. Still, players are slowly figuring out ways to beat this ever present archetype. Scrafty might have a terrible matchup against Alola’s Island Guardians, but it can wall physical attackers after enough Intimidates. Hidayat and Nick Navarre, two that are known to collaborate, had the same idea for countering Metagross as both players though Scrafty was the play. With the Assault Vest item, Scrafty can improve its bulk on the Special side while also making use of its fantastic move pool, with Hidayat running Stone Edge on his Scrafty which came in clutch during his Top 4 set against Leonard Craft’s Mega Charizard Y.

The next big thing (literally) is the return of Snorlax. Snorlax had a bit of a rough patch with the banning of Curse to prevent game freezes, but this Trick Room staple from the 2017 format is back. Many players thought that Curse variants of Snorlax were going to be a better choice for the 2018 format, but then they began to realize that Belly Drum is still amazing on Snorlax. Combined with stat reduction from Intimidate and/or Snarl, Snorlax can become unstoppable especially under a potential Shadow Tag trap from a partner Gothitelle. Snorlax has thrived in a metagame lacking in Fighting-type Pokemon, and will likely maintain its level of success in the 2018 season. Hidayat seems to think so.

A good weekend for countering the metagame

That’s all from Collinsville, but we still have one more tournament to discuss over in Malmo. This one should be fun. Mega Charizard X stole the tournament, but a Jynx in Top 4 stole the show. With the craziness in Malmo combined with what won over in Collinsville, we should have an interesting metagame developing throughout the 2018 season. We’ll have a full recap from Malmo ready for you in just a couple days!

The FBI investigation in college basketball: What is going on?