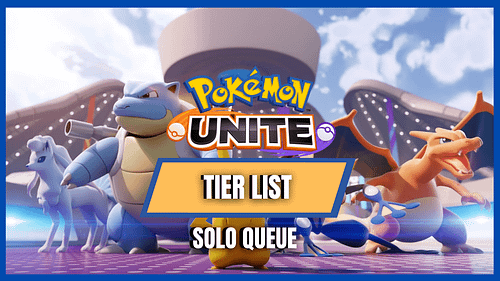 In the recent update to Pokemon Unite, the developers added a new playable pokemon: Espeon. Though not a game breaking pokemon, the changes before to the held item system warranted an updated Pokemon Unite Tier List. For the first time ever, Buddy Barrier and Score Shield received massive nerfs. Score shield has a far longer cooldown, making the typical dunk spamming an invalid strategy. And for Buddy Barrier, the extra barrier doesn’t stack with other allies anymore.

People tend to say the game changed a lot, but after the held item changes, the game is undoubtably going through the most evolution since release. 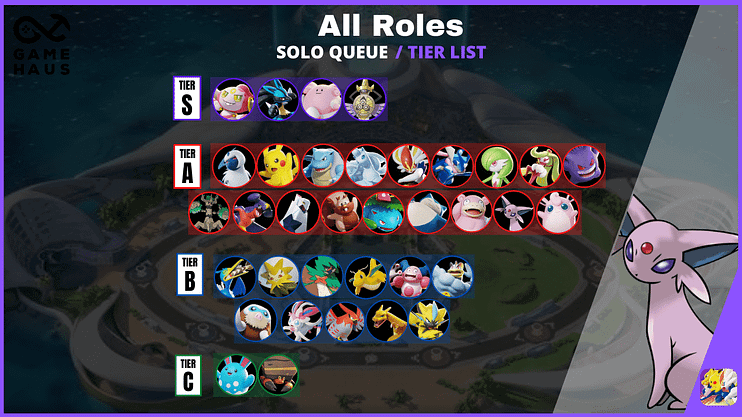 Espeon isn’t broken, surprisngly. It seems the developers are being more careful with the newer pokemon releases. For this list, it has been placed in the A tier. But it’s more towards the bottom rung of the A tier. Therefore, the specific pokemon release didn’t really change the meta too much. More on this later.

For the rest of the Tier List, it adjusted largely due to the nerfs to Score Shield and Buddy Barrier. The fact of the matter is, these two items received massive nerfs, pretty much invalidating them. Now, those specific held items work in more nuanced conditions, rather than functioning with practically every Pokemon available. This makes damage the name of the game, allowing picks that burst enemies down shine.

As a whole, the S tier picks perform wonders at solo carrying a game. Whether it’s through damage, healing, crowd control, or even dunking goals, they easily take the MVP label during the post-game screen. Locking in these picks, provided they go in the proper lane, drastically increases solo queue success rate.

The A tier are also quite good, but are a bit more team reliant than the S tier. In essence, they require a bit more nuanced conditions. Some picks absolutely need a front line or designated scorers, while a handful of them lack damage but instead provide massive utility.

Most of the B tier pokemon have better counterparts in both the A tier and the S tier. But for those who are really fond of the pokemon, they can definitely still experience success.

And lastly, the C tier pokemon should be avoided when attempting to maximize win rates in ranked matches. They can still pop off, but the conditions required are definitely pretty niche. Either the enemy has to not know how to play against them, or the entire team has to accommodate for their playstyles. Whatever the case, they’re not optimal for solo queue environments.

With all the overall rankings out of the way, time to get into each individual role, with some noteable picks for each one. Starting with the attackers.

As a special attacker, this pokemon feels pretty decent, but definitely not overpowered. The biggest weakness with this pick is the pokemon’s fragility, which remains a consistent issue throughout every stage of the game. In essence, even when it reaches level 8, and it ahead to a certain degree, it’s incredibly vulnerable to high damage front liners.

The main objective of Espeon is to deal burst damage from afar. If making comparisons to existing characters in the roster, it’s similar to that of Pikachu and Gardevoir. Espeon is, surprisingly, not that similar to Sylveon in playstyle.

The iconic electric mouse is still pretty good. Definitely not as good as before, with its impressive Buddy Barrier, but still rather strong. In fact, though it’s A tier list Espeon, the writer would argue that it’s actually stronger and more effective than Espeon in performing their relative functions.

Pikachu’s burst damage from a safe distance help take objectives and fights. It dropped from S tier to A tier because speedsters like Gengar and Absol are very strong, alongside burst damage Lucario. And when dove by these type of Pokemon, there’s little that Pikachu can really do.

The soccer fire type pokemon is really good. In fact, it’s almost an S tier, but not quite there. Thanks to feint, it can dodge some of the burst damage in the game. And in addition, Blazing Kick allows Cinderace to deal with threats and keep them in place. But similar to Pikachu, if caught out of position and with the held item nerfs, Cinderace gets popped like a pimple.

This speedster is one of the strongest burst carries in the game at the current moment. As previously mentioned, pokemon are more fragile now since they don’t all just go Buddy Barrier. And with less HP bonus from the item, and fewer barrier provided from Unite Moves, players have far less safety to protect them from Absol’s burst.

The bird definitely dominated the meta for a cool while. But after receiving multiple nerfs in a row, the pick isn’t quite as strong anymore. Regardless, Talonflame still functions similarly as it did before.

This pokemon is now incredibly strong. Thanks to the buffs to Safeguard alongside Egg Bomb, Blissey manages to keep a specific ally practically invulnerable alongside itself. And in a game state where Buddy Barrier received massive nerfs, and therefore burst damage has become a dominant method of winning fights, Blissey effectively mitigates the meta. Egg Bomb also stacks uses, allowing Blissey to hold onto 2 at once.

The damage and utility of Egg Bomb is actually really high. CC disrupts in an area of effect, allowing for allies to follow up thereafter. And of course, Blissey’s Unite Move comes in clutch, saving allies and being one of the few Unite Moves to still properly utilize the benefits of Buddy Barrier. For those looking for a conventional support, definitely give Blissey a try. The pick is amazing right now.

Though having received mutliple nerfs in the past, Hoopah still remains a dominate pick. It plays a bit more like a damage carry, and doesn’t really build the big map teleporting move anymore (Hyperspace Hole). For those familiar with Lulu, think of Hoopah as that champion from League of Legends. By using Trick, it creates a barrier alongside speeding up an ally pokemon. The move combos with Shadow Ball as well, which is the stronger move option at the current moment.

Of course, Hoopah still teleports allies during its Unite Move usage. That move, on its own, make Hoopah an easy S tier. Teleporting allies, a mechanic unique to Hoopah, allows for more coordination during key fights, such as the game determining Zapdos.

The buffs to Trevenant helped the pick finally see play in the meta. Thanks to the increased healing and diminished bleed, Trevenant can finally successfully dive into the enemy team and survive. And since enemies no longer have Buddy Barrier to rely on, or not so much anymore, the damage Trevenant deals often sticks. In a meta where sustain is hard to come by, Trevenant stands out as a pokemon that doesn’t seem to struggle with surviving too much.

Without Score Shield, Crustle is a sad bug. The pick relied heavily on the score shield spam dunking strategy, alongside buddy barrier, to make some unstoppable dunks. But since Score Shield barrier shrinks down first rather than other barriers, the entire strategy goes down the pooper.

Love it or hate it, Lucario is back on top. This pokemon receives nerfs over and over again, but those can’t seem to stop the fox like pokemon. With the nerfs to defensive itemizations, burst damage became dominate. And Lucario is the king of burst damage. The amount of times it can reset its Extreme Speed in a team fight, alongside against bees, easily make Lucario the strongest all-rounder in the game.

The newest pokemon feels really lackluster, even more so than before. Azumarill doesn’t deal enough damage, especially when compared to its counterparts in the All-Rounder category. In fact, Aegislash is really strong now. The water type doesn’t seem very useful, and its moves sometimes even seem a bit useless. Probably avoid this pick, for those seriously attempting to climb the ranked ladder.

And that is all! Keep in mind, this Pokemon Unite tier list is very much catered towards solo queue. It’s applicable for duo and trio as well, since the 1-3-1 strategy doesn’t see play in duo/trio queues. For those who don’t know, 1-3-1 is when one pokemon goes top, one goes mid, and three go bot. This is the dominant meta for competitive play, but does not see play in the majority of ranked games, outside of premade full parties. In addition, this tier list will be updated as more experience with the newest update is acquired. So make sure to come back regularly to check in on what’s changed!