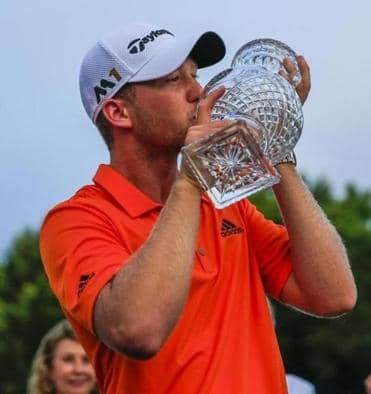 Another weekend of golf is in the books for the 2015-16 season and another first-time winner was crowned. Daniel Berger took home the trophy at the FedEx St. Jude Classic after posting an aggregate score of 13-under. Berger was the second youngest golfer to take home a win at this event.

Brooks Koepka, Phil Mickelson, and Steve Stricker finished the event at 10-under a piece in a three-way tie for second place.

Berger was impeccable this weekend and after the second round, he just seemed to cruise through TPC Southwind, short of a few hiccups. In his final round, Berger bogeyed both the first and tenth hole but avoided the downward spiral young, and adept, players can fall into after a bad hole or two in a clutch situation. Berger trekked on despite his mistakes and made two birdies on the front and three on the back to cover up his tracks and then some. Berger would go on to post a three-under 67 to finish up the event.

All three golfers in the second place tie played phenomenal as well, but their shortcoming allows us to examine the importance of being able to post a score at some place under par in every round. Both Koepka and Mickelson got off to a slow start on Thursday by posting rounds at even-par. Stricker back-pedaled by posting a one-over 71 in his second round after a four-under 66 in his first. While this wasn’t their sole downfall, it emphasizes the importance of consistency on the PGA Tour.

Next week, the PGA Tour heads to Oakmont Country Club for the U.S. Open as an extensive list of golfers will attempt to dethrone Jordan Spieth. Play starts this Thursday at 6:45 AM ET, with TV coverage starting on Fox Sports One at 10 AM ET.