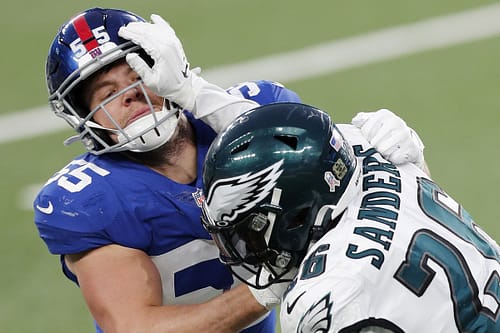 This is the final edition of looking the Philadelphia Eagles 2022 schedule and predicting their win-loss total. We will be looking at Weeks 15-18 in this edition, which sees the Eagles have two conference games and two out of conference games.

The Eagles will be on the road again for a Week 15 game against the Chicago Bears. This is an interesting game for Philadelphia as they have the Cowboys the next week in Dallas, which could very well decide the NFC East. This is a trap game for the Eagles. They are facing a Chicago team that is not predicted to set the world on fire in 2022. However, they do have the potential to beat some good teams and could possibly throw a curveball in the Eagles’ season.

Justin Fields is going into his second season after having a subpar rookie year. He threw for less than 2,000 yards with seven touchdowns and 10 interceptions. However, he did run the ball well with 420 rushing yards and two touchdowns. He will have a lot to prove in his second season. Philadelphia needs to just focus on the Bears in Week 15 and avoid the letdown. The Eagles will win this game with their offensive firepower, but this game will be uncomfortably close for Eagles fans.

The best Christmas present the Eagles could give would be to beat this Cowboys team on the road in a meaningful game. As said before, this game could very well decide the NFC East division. Earlier in this series, it was predicted that the Eagles would win the first matchup against the Cowboys in Philadelphia, but could they do it twice? It is definitely possible, with how much potential the Eagles’ offense and defense has to be great.

This game comes down to the Eagles’ defense holding the Cowboys’ offense to a minimal number of points. This needs to be done by pressuring Prescott and not allowing many explosive plays for the Cowboys on the offensive side of the ball. The Eagles’ offense just needs to execute one play at a time. Furthermore, Hurts is probably going to make mistakes in this game, but he cannot get rattled. Philadelphia cannot be one-dimensional on offense like they were for most of last season. The Eagles need to mix things up both passing the ball and rushing the ball in this game. So, who will win this game? The edge goes to the Cowboys in this one. Prescott is a veteran quarterback and has more experience in big-game situations. Furthermore, this game is on the road in front of a rowdy Dallas crowd.

After what would be a disappointing loss in Week 16, the next game on the Eagles 2022 schedule will be at home against the Saints in a Week 17 matchup. The Saints are another one of those teams that have potential in 2022. Jameis Winston is projected to be at the helm for the Saints this season. His season got cut short in 2021 after suffering a season-ending back injury against Tampa Bay in Week 7. He was off to a good start before this injury, as he led the Saints to a 5-2 record. He also had just over 1,000 passing yards, 14 touchdowns and three interceptions. Furthermore, the Saints is expected to get one of their top receivers back in Michael Thomas who has not taken an NFL snap since 2020. Furthermore, the Saints also tout Tyrann Mathieu, Cameron Jordan, and Demario Davis on defense.

This has the makings for another late-season letdown for this Eagles team, which is exactly what will be predicted for this Week 17 matchup. New Orleans will have a good team in 2022 and has great potential to be a playoff team.

The Eagles will go into their final game after having three tough game stretch. Luckily their final game will be against the New York Giants at home. This will be a chance for the Eagles to end the season with momentum and prepare for a possible playoff game. This game may not even feature a lot of starters if the Playoff drama has ended by this point. However, this game will be predicted with the Eagles’ starters being intact since it is unknown how the playoff picture will look.

Philadelphia will be playing mad in this game after what would be two straight losses. It is predicted that the Eagles will blow out the Giants in this one and finish their season on a strong note.

This concludes predicting the Eagles’ win-loss record based on their 2022 schedule. It is predicted that the Eagles will finish the season with a solid 11-6 record with a potential playoff berth seeming likely.