I always say that football concepts are more complicated than most people think.  Here is a rundown of the most commonly used football routes.

Bubble screen – There are a few variations to this route.  Some coaches will tell you that a bubble screen is when a wide receiver takes one step forward, only to jump back a second later to receive the pass from the quarterback.  It’s a quick pass, so the receiver should work his way back to the quarterback to allow his blockers to set up in front of him.  Any well-executed screen pass requires precise blocking.

Other coaches believe that a bubble screen is when a slot receiver will start running toward the sideline, peering over his inside shoulder to receive the ball.  Regardless of the variation, a bubble screen asks the tackles and guards to kick out as well as the other receiver on the play side to block the man on him.

Comeback – A comeback route might be the hardest route to execute because it asks a lot of the quarterback and the receiver.  The receiver runs 10-15 yards then plants his inside foot to cut back outside.  The receiver must run this route precisely because he is in danger of very easily running out of bounds, especially since comebacks force receivers to gain an outside release right out of the gate.  This is a timing pattern so the throw must be to a spot on the field where the receiver will end up.  The quarterback also has to be aware that if the cornerback reads the play well, this route has got pick-six written all over it. 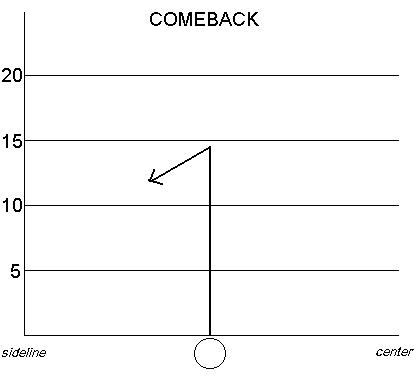 Corner – A corner route is when a receiver runs straight about 10-15 yards then cuts at a 45-degree angle toward the sideline, or “corner” of the end zone.  Corner routes usually work best if run by the inside/slot receiver or a tight end.  That’s not to say that an outside receiver won’t run a corner but he has got to be aware that he is much closer to running out of bounds so his break to the outside should be more subtle.  Being conscious of your surroundings is critical for running a corner.

Dig – A dig, or an “in route” for the average fan, is when a receiver runs straight for roughly 10-12 yards then plants his outside foot to cut inside sharply.  Digs work well against cover three because the receiver is supposed to catch the ball in an area on the field that lies in between cornerback and safety responsibility.  Wide receivers and slot receivers may run this pattern.  I think that once the receiver makes his cut inside, the ball should already be there.  I’m not a big fan of running digs in which the receiver makes his cut and then runs for another 10 yards across the field because this takes more time to develop.  And you know what they say, a throw that is late and across the middle is asking for trouble. Drag – One of my favorite routes to run in football, a drag, albeit a simple concept, is a shallow route in which the receiver gets an inside release as quickly as he can and runs horizontally across the field.  I like this route for a few reasons.  First off, it’s not difficult to run.  Drags don’t require hard steps and rigid footwork.  The receiver just has to get inside within five yards of the line of scrimmage and run toward the sideline.  This route is ideal for small, speedy, slot receivers.  Drags usually don’t even go beyond the linebackers; that’s how shallow they are.  This route can be used deceptively, meaning that, while the linebackers are accounting for a drag another receiver will be open deep, or on short yardage situations when the receiver is productive after the catch.  The receiver should receive the pass at least when they are in the middle of the field, if not on the opposite side of the field that they started on.

Fade – This is the only route in which the quarterback is more vital than the receiver for the success of the completion.  Usually used inside the red zone, the fade occurs when an outside receiver gains an outside release and separates himself from the cornerback so that he can jump up and snatch the ball out of the air.  There are two keys to making the fade work: a big receiver and a high throw.  The fade is essentially a jump ball, the ultimate receiver-versus-cornerback pattern.  The throw has to have a slight touch so that it sails in the air for a few seconds to allow the receiver to be in good position.  A deep fade may also be implemented when the outside receiver runs straight deep, only to tail his route off towards the sideline.

Go/Seam – A “go” is when any receiver on the field simply runs straight deep.  A seam is similar to a go except the receiver runs slightly inward.  A seam works best against a cover two defense because it splits the deep middle which is the weak spot in cover two.  Both routes are supposed to be deep.

Hitch/Hook – A hitch is a two or three step route in which the receiver runs straight then plants hard with his outside foot and turns around to see the ball already there.  Hooks are like hitches, just a little deeper at five-to-seven steps.  How deep the cornerbacks are playing dictates whether or not a hitch or hook would be best.  These routes are possession-type and are not meant to gain a ton of yards. 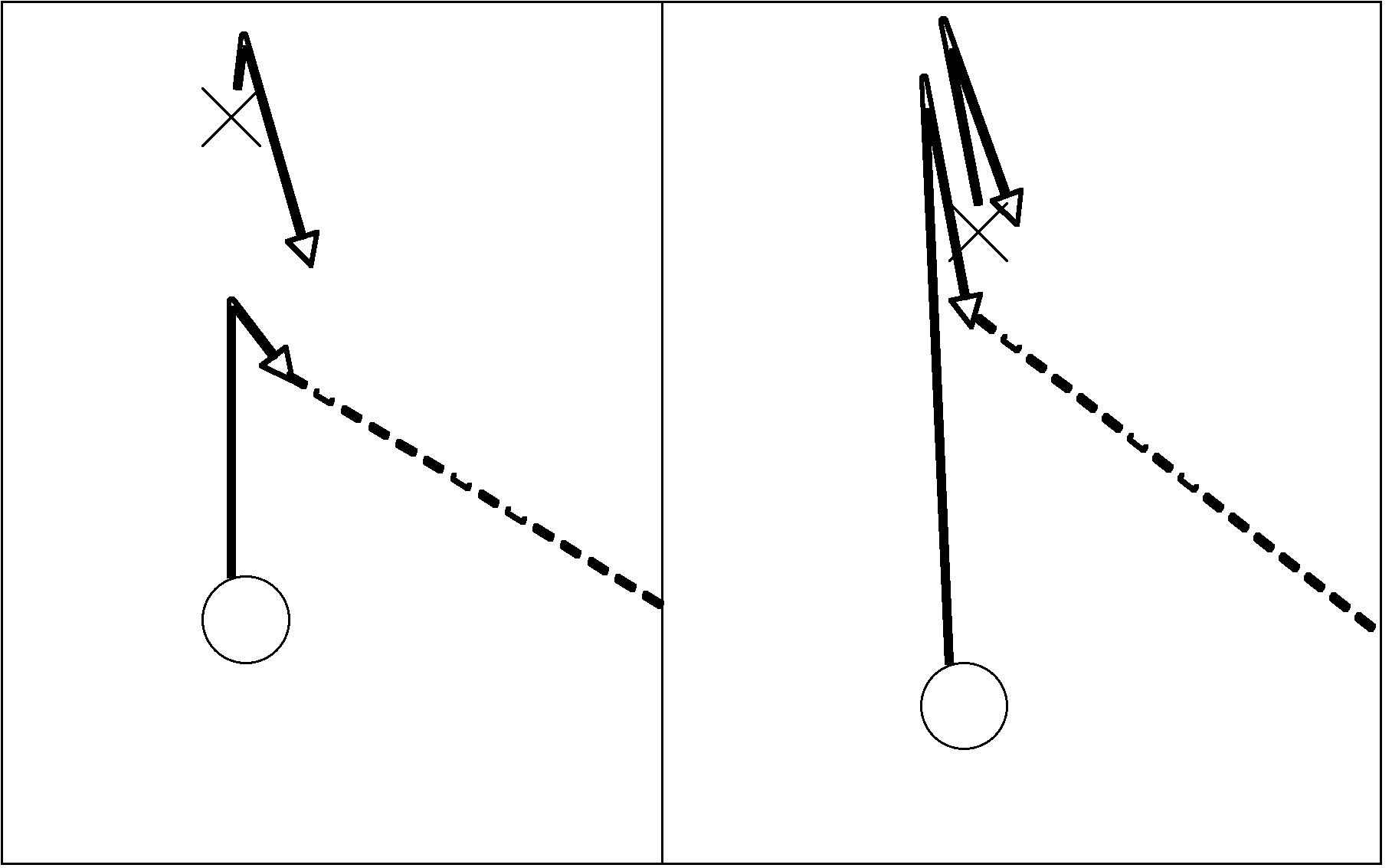 Out – An out is usually a quick five yard, sometimes deeper, pattern, in which the receiver cuts outside, not inside like a dig. Outs work especially well wth slot receivers and tight ends, or outside receivers when an offense is trying to stop the clock by running out of bounds. Slant – The best route in football, the slant crosses over into all three zones: shallow, intermediate, and deep.  Slants affect the cornerbacks, linebackers, and safeties like no other route.  The receiver breaks diagonally from one corner on the field to the opposite corner.  Slants can be short or deep, and they revolve around the notion of cutting in front of or behind defenders.  They are very tough to defend. 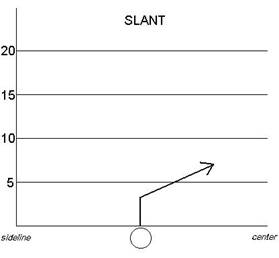 Swing/Wheel – This is the most typical route for a running back.  The back simply curls outside slowly in anticipation that the ball will be thrown to them if no one else is open.