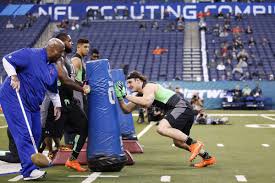 The Jaguars have one of the worst pass defenses in the league. They need a better pass rush and secondary help. Optimally they would get Joey Bosa, but Ramsey had an impressive combine and would be a good fit for the Jaguars.

Oakland finally has their offense on the right track. Now they need some defensive players to put with with Khalil Mack. Rankins can provide an inside pass rusher to go along side of Mack. The Raiders only need a little more help to reach the next level of making the playoffs and getting a good defensive tackle like Rankins helps them a lot.

Fuller would be a top 15 pick if he didn’t have a season ending knee injury and could be the best corner in the class when it is all said and done. The Lions go up against Aaron Rodgers every year so getting a corner would provide an upgrade and help the Lions in their division.

The rumors are that the Jets won’t keep Chris Ivory and instead will let him walk in free agency. To replace him they will need to take the first running back in the draft. Elliot is the best player available at this point and fills a need, making this the obvious choice for the Jets.

The Texans will likely want to get Ezekiel Elliot, but with him gone they will have to settle with Derrick Henry. It would be most beneficial for the Texans to try to trade down and pick Henry a little later in the first or early second. Christian Hackenberg will be available in round two so no need to reach and draft him here. Henry is going to be the biggest running back in the NFL by listed weight, although Eddie Lacy may not be listed at the correct weight. Henry will provide a power run game for the Texans.

Teddy Bridgewater got sacked too many times for a team that primarily sticks to the run game. They need to protect their investment in Bridgewater, who has a chance to have a great year in the Viking’s new dome.

The Panthers have a great defense, but could use someone to pair with Josh Norman. Jackson had a great combine, running a 4.3 second 40 yard dash and could make his way into the first round.