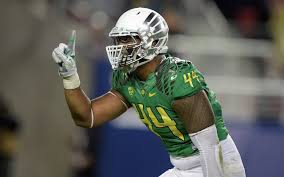 The Jaguars have one of the worst pass defenses in the league. They need a better pass rush and secondary help. Bosa has been falling in mock drafts and Jacksonville will get a steal at pick number five. He only had 5 sacks this season at Ohio State, but was suspended for the opener against Virginia Tech and was double and triple teamed the rest of the season. He has a chance to get back into the top three with a good combine.

The Buccaneers need a better pass rush and can get a great edge rusher with Noah Spence. Spence was a star at Ohio State before being kicked out of school for repeated failed drug tests. He wound up at Eastern Kentucky and now finds himself as a top edge rusher in the draft class. Spence will be able to improve his stock at the combine with good interviews.

The Giants will be looking to upgrade every level of the defense before next season. They only had 23 sacks so they will probably start rebuilding with the defensive line. Emmanuel Ogbah had a great senior season, with only two games without a half-sack, and can provide a good pass rusher for the Giants.

Stanley fell in my last mock draft due to concerns about his work ethic, but he is so talented that he most likely won’t drop too far into the first round. Notre Dame had a wide receiver playing running back last season, who played very well, mostly in part to Ronnie Stanley’s blocking ability. Stanley will also be able to protect Derek Carr, which will be a priority for the Raiders.

The Lions still need inside help after losing Ndamukong Suh and Nick Fairly last season. Rankins has been rising up draft boards and can start immediately for the Lions.

The Colts want to upgrade their offensive line and defense next season. Andrew Luck will have to be protected with his recent injuries. Conklin is used to blocking in a pro-style offense, which he did well at Michigan State last season.

Floyd is a very versatile player who can be a good pass rusher in the NFL as well as being a good cover linebacker. The Ryan brothers will want to improve the pass rush so that they can get the defense up to their standards.

The rumors are that the Jets won’t keep Chris Ivory and instead will let him walk in free agency. To replace him they will need to take the first running back in the draft. Elliot is the best player available at this point and fills a need, making this the obvious choice for the Jets.

If a suitable corner is available the Redskins will jump all over the opportunity and select the player. Fuller would be a top 15 pick if he didn’t have a season ending knee injury and could be the best corner in the class when it is all said and done.

The Texans will likely want to get Ezekiel Elliot, but with him gone they will have to settle with Derrick Henry. It would be most beneficial for the Texans to try to trade down and pick Henry a little later in the first or early second. Christian Hackenberg will be available in round two so no need to reach and draft him here. Henry is going to be the biggest running back in the NFL by listed weight, although Eddie Lacy may not be listed at the correct weight. Henry will provide a power run game for the Texans.

Chad Greenway has said he wants to play one more year and then retire. He hasn’t been playing all that great anyways, so the Vikings will want to get another talented linebacker.