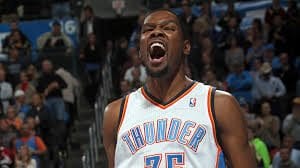 Don’t Sleep When There is Thunder

All of the talk of the NBA season has been about Kobe’s last year and the Golden State Warriors. Even secondary to these topics, the San Antonio Spurs were the huge topic of conversation due to their chance to go undefeated at home during the regular season. If people still couldn’t find anything to talk about they would shift to the Cleveland Cavaliers, who are the favorites to come out of the Eastern Conference in these NBA Playoffs. There is one team that everyone has been overlooking, the Oklahoma City Thunder.

There has been many different ways the Thunder have been disrespected this year, and not just by what people like to talk about when they think of the NBA. Enes Kanter got snubbed for the Sixth Man of the Year award, which was given to Jamal Crawford. Crawford averaged 14.2 points per game and 2.3 assists per game, while Kanter averaged 12.7 points per game and 8.1 rebounds per game, which is a staggering number considering he was coming off of the bench. The Sixth Man of the Year rarely goes to big guys, but this is surely a case where Kanter should have won the award.

Another way the Thunder has been disrespected came at the hands of one of the most vocal owners, Mark Cuban, who owns the Dallas Mavericks. He said that Kevin Durant was the only superstar player on the Thunder after his Mavericks lost to Oklahoma City in the first round of the playoffs. This was clearly a knock of Russell Westbrook. Westbrook had a great season this year and probably would have won the MVP if Stephen Curry wasn’t hitting three-pointers from every corner of the gym. Westbrook has averaged 23.5 points per game, 10.4 assists per game and 7.8 rebounds per game, to complete a historically good season. While people haven’t been paying much attention to Durant because of the talk of the other great teams in the league, Westbrook has also been overlooked because of these teams, giving both players a gigantic chip on their shoulders.

Why is everyone sleeping on this team? The Warriors, Cavaliers and Spurs have shown that while they are good they aren’t unbeatable. The Thunder won 55 games this season and should be getting a little more credit for that. The only thing people bring up when talking about the Thunder is there inability to close out games late. This is a huge issue, but they managed to get the three seed in the difficult Western Conference despite these struggles. Durant has shown over his career that he is more than capable of being clutch.

With all of this criticism and disrespect shown towards the Thunder this year, there is a giant chip on their shoulder. Durant and Westbrook are still one of the best combinations in all of basketball and can beat any team when playing in a seven game series. Throw in other quality players such as Serge Ibaka, Steven Adams, Andre Roberson, Anthony Morrow, Dion Waiters, Nick Collison, Kyle Singler, Randy Foye, Nazr Mohammed, Cameron Payne and Enes Kanter, and you have a team that creates huge match-up problems. With those players, it really takes some nitpicking to criticize this team.

The Thunder are down 1-0 due to a terrible loss by 32 points at San Antonio in their first game of the Western Conference Semi-Finals. Then they got shown more disrespect by the national media. Durant and Westbrook are not players that I would want to make angry. Westbrook plays with enough ferocity that he doesn’t need any more motivation. Durant has been criticized all year, with ESPN’s Cari Champion saying he didn’t have the heart to be a top five player in the league. Anyone who would say that hasn’t followed the NBA or Durant’s story well enough, and that’s putting it in a nice way. Now is the time that he will step up, along with Westbrook, and lead the Thunder to victory. So Spurs, Warriors and Cavaliers, don’t get rattled when the thunder booms.