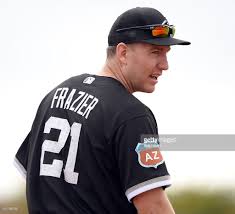 The White Sox won two out of four from the Angels and then swept the rangers for five wins this week. Chicago is playing really good baseball and is at the top of the American League Central. Melky Cabrera hit .333 for the week to lead the offense. His two home runs were second on the team behind Todd Frazier who had three home runs this week. Mat Latos has continued his bounce back season and improved to 4-0 with a 0.74 ERA. Chris Sale is also 4-0, but has a 1.80 ERA.

Kansas City took two out of three from the Tigers and Orioles this past week. Mike Moustakas has heated up hitting .375 and two home runs this week. Jerrod Dyson added a .368 average and two stolen bases to bolster the offense. Wade Davis picked up two saves in the last seven days to continue to lead one of the best bullpens in baseball. Yordano Ventura had two starts and two wins for a weak starting rotation.

The Indians lost two out of three to the Mariners, but then swept the Tigers. Francisco Lindor hit .409 and added 5 walks for the offense. Carlos Carrasco has had a great start to the season and this week went 1-0 in two starts with a 1.00 ERA. The bullpen has pitched really well, which includes great efforts from Joba Chamberlain, Ross Detwiler, Jeff Manship and Zach McAlister.

Detroit lost two out of three to the Royals and then got swept by the Indians in a rough week. Ian Kinsler was far and above the best player at the plate for the Tigers. He hit .320 with two RBI. Jordan Zimmerman got the only win for the Tigers with 6.1 innings pitched and no runs allowed.

After taking two out of four from the Brewers, the Twins were swept by the Nationals. The Twins had a great offensive week with Byung Ho Park, Kurt Suzuki, Eduardo Nunez, Miguel Sano and Eddie Rosario all hitting above .300. Ricky Nolasco had one of the two wins for the Twins this week with a 1.42 ERA.

Player of the Week: Todd Frazier, 3B, White Sox

Frazier hit .292 with three home runs this week to get his season back on track.