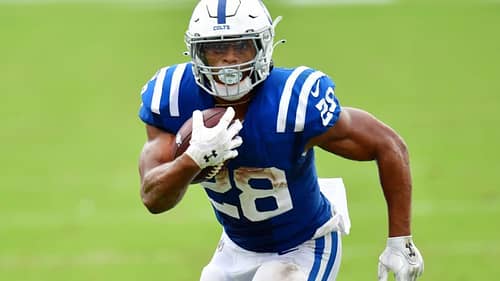 JACKSONVILLE, FLORIDA - SEPTEMBER 13: Jonathan Taylor #28 of the Indianapolis Colts runs with the ball during the fourth quarter against the Jacksonville Jaguars at TIAA Bank Field on September 13, 2020 in Jacksonville, Florida. (Photo by Julio Aguilar/Getty Images)
Fantasy Football

The 2022 NFL Draft is over, giving a clearer picture of rosters for the 2022 season. With that fantasy football rankings can be released. Here are the 2022 fantasy football running back rankings. (Note: These are best used for standard-scoring leagues and will be updated until the season starts)

After finishing as the top running back last season, running lanes should be more open with Matt Ryan at quarterback. Taylor is the safest pick atop fantasy football drafts.

Henry was on a great pace before suffering a foot injury in 2021. With an offseason to heal, he should have elite production again, even if teams can continue to focus on stopping the run even more now without A.J. Brown on the team.

Over the last few seasons, McCaffrey has dealt with injuries. When he is on the field, he is one of the best running backs in the game. It is still worth taking McCaffrey in the first round, but selecting backup option is necessary.

From a points-per-game perspective, Cook was a top 10 running back last season. He only played in 13 games though due to injuries. With a full season, Cook can regain his spot as a top-five running back.

Ekeler rebounded from an injury-plagued 2020 to have a fantastic 2021 season that saw him finish as RB2. With Justin Herbert improving, he and Ekeler can both have big-time fantasy seasons in 2022.

After he finished as RB3 last season, the Bengals significantly upgraded the offensive line. Mixon is set for another big season, as there really isn’t anyone on the Bengals’ roster worth taking too many carries away from him.

Harris had a great rookie season where he was RB4. The Steelers have improved the offensive line and a new quarterback will help Harris stay productive.

Despite only playing 14 games in 2021, Chubb ranked seventh for fantasy running backs. Chubb will continue to be a great running back in 2022, even if Deshaun Watson ends up being suspended and boxes are stacked against him.

He played in 14 games and ranked as RB9 in 2021. The 2022 season provides a similar opportunity, if not better for Kamara. New Orleans will have Jameis Winston back healthy and more help at wide receiver to keep the field spread.

Conner went from being a touchdown vulture to being a great fantasy running back from the start of the season to the end last year. In 15 games played, he was able to rank as RB5 in 2021. Chase Edmonds is now in Miami, which keeps things open for Conner to produce in 2022.

Jones was the 13th-ranked running back in just 15 games played. A.J. Dillon will continue to cut into his workload, but Jones is still a solid fantasy running back.

If it weren’t for injuries, Barkley would rank higher. He didn’t look great even after returning from injury in 2021. Barkley should be selected with caution, but the talent is there.

Elliott isn’t the running back he once was, but he still finished sixth in fantasy points for running backs in 2021. Tony Pollard may take some carries away, but Elliott is still a decent fantasy option.

In 11 games played, Swift ranked as RB23 in 2021. Staying healthy is the name of the game for Swift, as is one of the best weapons the Lions have on the roster.

Ronald Jones is no longer with the Bucs, so Fournette could be very successful. Other backs on the roster may get some third-down work, but the rest should be Fournette’s.

The Rams showed last year that they prefer to utilize one running back mostly. Darrell Henderson benefitted, while Akers was hurt last season. Now it is Akers’ turn.

In 14 games, Montgomery was able to rank 20th in points per game. Teams are going to stack the box against him with the limited outside weapons in Chicago, but Montgomery will get a lot of work.

Williams ranked 18th last season while splitting time with Melvin Gordon last year. Gordon is back, but Williams could get even more of the carries out of the backfield this season.

Gibson battled through injury to rank 10th for running backs last season. Brian Robinson is joining the team, but Gibson should be the lead back still.

While he did finish as RB16 last season (15 games played), the Raiders haven’t shown great faith in him. They’ve declined his fifth-year option, which could mean they may utilize him a little less.

Hall is joining Michael Carter in the Jets’ backfield. He is more of the ever-down back than Carter, which makes him an intriguing option for fantasy.

Unfortunately, Dobbins was injured last year and missed the season. He can be very good this season, but the Ravens will have several running backs contributing like usual.

In just 12 games played, Mitchell ranked as RB24. The rookie had a great season, but Kyle Shanahan has shown that he doesn’t stick to one running back. Selecting Ty Davis-Price could cut into Mitchell’s workload.

The Patriots keep adding running backs in the middle to late rounds of the NFL Draft, but Harris should be the most utilized. He ranked in the top 10 last season and will have to help keep the chains moving for New England.

Sanders has had trouble being consistent at the NFL level. He is the lead running back in the Eagles’ offense, but some of his production will be taken away by Jalen Hurts.

Although he missed his rookie season, Etienne figures to be good in his second season. He will likely split time with James Robinson, but both can be viable fantasy options.

Edwards-Helaire hasn’t played up to his expectations, but he is still the lead back in Kansas City. He was RB38 after only playing in 10 games last season.

The Dolphins needed running back help and they went out and got it. Edmonds lost favor after James Conner broke loose in Arizona, but can get most of the work in Miami this season.

Chris Carson‘s neck injury is worse than originally thought. That leaves Walker and Rashaad Penny to fill in before he returns. Walker is a rookie, but was selected relatively early in the NFL Draft for a reason.

Even playing behind Nick Chubb, Hunt has been able to carve out a nice role with his pass-catching abilities. That will be the same this season.

Dillon just continues to get more work as his time in Green Bay goes on. He will still be behind Aaron Jones, but the Packers will use both to keep them fresh. Dillon was RB21 last season.

The Broncos decided to bring back Gordon to pair with Javonte Williams again. Finishing top 20 might be too rich this season, but he can still be useful on fantasy rosters.

In Buffalo, reps will likely be split between Singletary, Zack Moss and James Cook. Josh Allen will also take some of the rushing production away. Singletary should be the lead back, but his ceiling is relatively low.

Penny showed some life last season in relief of Chris Carson. He will now battle with Ken Walker for carries until Carson can return.

Every season, the Cowboys explore new ways to get Pollard the ball. He was a top 30 running back last season and offers similar value this season. His consistency just can’t be relied upon.

Patterson broke out in 2021, but can he keep it up? With a passing attack that will likely take a huge hit, defenses will be keying on him. His production dropped as the season went on in 2021 and it might be a sign of things to come in 2022.

While Breece Hall figures to get most of the work, Carter is the more viable pass-catcher. He also has experience, as he was RB30 last season, so he can still be a huge factor in the backfield.

Robinson will lose some carries to Travis Etienne, but he is still a proven and talented running back.

The Patriots use multiple running backs, so Stevenson will be used. He was RB36 last season.

With the neck injury, Carson’s value is completely up in the air right now.