This past weekend, four major tournaments happened in different parts of the world, each with their own little spin on the Ultra Series metagame. Of course, each region had their selection of “standard” teams and strategies, however each tournament’s results developed a unique identity for itself as well as its region. Let’s take a look at what the Bristol, Malaysia and Hong Kong regional championships, as well as the Cancún special event, had to offer to VGC 2019.

Lopunny and Lucario Steal the Show in Bristol 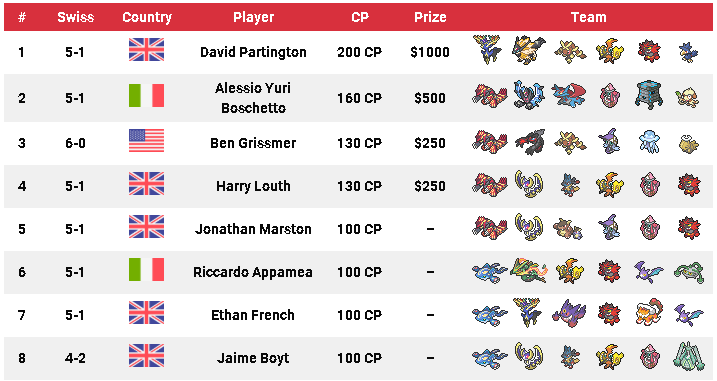 The first European regional had a lot to live up to after Berlin’s international showdown, and Bristol certainly delivered some interesting results. The classic picks for Mega Evolutions like Salamence, Rayquaza and Gengar showed up in the Top 8, but the underrated picks, Mega Lucario and Mega Lopunny, each appeared twice.

The teams featuring these two Mega Pokemon were interesting beyond these choices too. The winner, David Partington, used a Murkrow which has the potential to add a ton of different support options for a team. The most popular role for a Pokemon like Murkrow is a Tailwind setter, but just to give some examples from the large list of other support options, Murkrow can carry moves like Taunt, Haze, Foul Play and Quash. Since Murkrow can still evolve, it can make good use of the Eviolite item which can boost both of its defense stats by 50%. Murkrow certainly needs the extra bulk to survive in this metagame, and it’s cool to see someone make it work.

Ben Grissmer hopped on the Lopunny train, but also brought along the terrifying late-game win-condition known as Shedinja. We don’t know too much about the Mega Lucario from Jamie Boyt and Harry Louth, but both teams similarly carried Tapu Lele, Tapu Koko and Lunala. Despite the Celesteela on Boyt’s team, both teams seem to be more offensive in nature keeping with the theme of Mega Lucario. 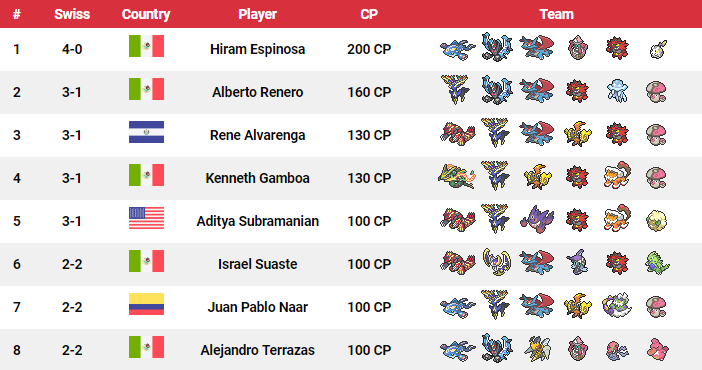 Despite this tournament being a special event (with prizing on par with that of a regional championship), there were only 18 players in attendance. Mexican players Hiram Espinosa and Alberto Renero held down their home turf with their first and second place finishes. After Ultra Necrozma’s strong showing at the Hartford regional championships last weekend, these players demonstrated yet again that this restricted Pokemon is a real contender.

The main attraction here is Alejandro Terrazas’ eighth place team with a plethora of unique members. Adam Dorricott would be a huge fan of this team that featured Mega Beedrill as its Mega Evolution of choice. Mega Beedrill is a fast, offensive powerhouse and although its Poison-typing and ridiculously strong ability, Adaptability, are valuable, its frailty makes it dangerous to use if played incorrectly. Lickilicky is an interesting case, but a Pokemon with very strong utility in a format dominated by weather wars. Lickilicky has access to Cloud Nine which can eliminate the effects of weather, allowing Primal Kyogre to blast Primal Groudon even under Desolate Land.

Lastly, there’s Israel Suaste’s use of Tyranitar, which probably would’ve worked a little better earlier on in the format since it could overwrite Groudon and Kyogre’s weather, but it can still work well in Ultra Series as a means of countering Pokemon like Lunala. 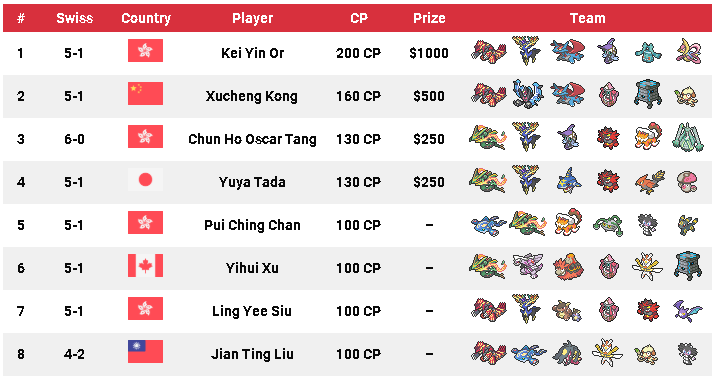 Tournaments from this region rarely get significant coverage, but for those who have been paying attention to recent tournaments may recognize some players that performed well here.

Yuya Tada had a strong showing at the European International Championships, and he had yet another one in Hong Kong. Tada returned with his team featuring Talonflame, Xerneas and Mega Rayquaza, but he made a slight change in the addition of Mega Sharpedo. This Mega Evolution is by no means common in VGC 2019, but offers a fast offensive presence that also has access to some neat support options. Of course, bringing this Mega Evolution into battle means you would be without Mega Rayquaza, however, with Rayquaza’s help, Mega Sharpedo can easily dispose of Primal Groudon.

Yihui Xi is another name players in the West may recognize as he’s earned quite a large amount of Championship Points in North America. Xi is famous for his love for Palkia, and he’s embraced the lesser seen Trick Room side of Palkia’s arsenal with the powerful sweeper known as Mega Camerupt. A strange team for sure, but definitely one Xi knows well enough. He’ll be an interesting player to follow come August at the World Championships. 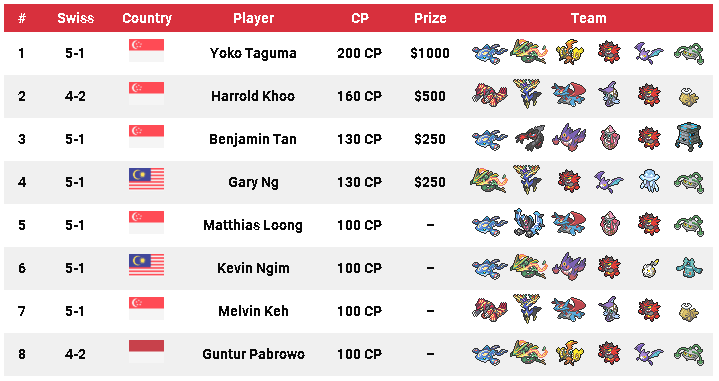 Melvin Keh posted yet another Top 8 finish with the same team he used to score one in Berlin a couple weeks back. While there was some Malaysian representation in the Top Cut, it was mainly dominated by players from Singapore.

To be honest, Malaysia (on the surface) appears to be the most lackluster in terms of metagame developments. One interesting thing to note is that Harold Koo, using a similar team to his fellow Singaporean Melvin Keh, reached the finals with Shedinja. We’ve seen Shedinja teams pop up everywhere during the 2019 season, but usually it has been a member of some rather unorthodox teams. What we’ve seen with teams like Keh and Koo’s is that Shedinja can work with some of the metagame’s most solid of staple Pokemon, cementing Shedinja as a format mainstay.

These tournaments produced some of the most unique teams to be seen thus far in VGC 2019’s Ultra Series, and it’s great seeing these regions push to have more tournament coverage. Next weekend, the tournament action will return stateside for the Santa Clara regional championships.