Week 2 of OWL Exposes its Biggest… 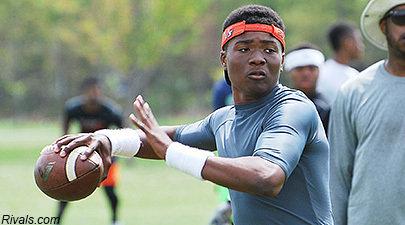 In the college football world, every single school is scrambling to polish off their 2016 class of recruits. National Signing Day is just over two weeks away, meaning plenty of high-caliber recruits are being recruited hard by big name schools.

Ohio State has been waiting for a few top targets to announce where they’ll attend school next fall, hoping their name will be announced by their favorite recruits.

Today, OSU won big as they gained three top recruits who have propelled OSU to the best class of 2016.

At noon EST, Ohio State received their first commit of the day. Binjimen Victor, a four-star prospect from Fort Lauderdale, Florida announced via twitter that he’d attend The Ohio State University next fall.

Victor had offers from 43 schools, so the sought after pass catcher is a huge find for Ohio State.

After reports filed in that Jones had committed to OSU on Friday night, he confirmed today that he would attend Ohio State in 2016.

To end the day, OSU gained a quarterback from Bullis High School in Maryland, Dwayne Haskins. Ohio State stole Haskins from Maryland after Tristen Wallace flipped from OSU to Oregon.

This was the second commit who flipped from Maryland to Ohio State, paving way for a bitter taste in the mouths of the Terrapin faithful.

These four-star commitments propelled Ohio State from the third-best class to the top of college football for 2016. Ohio State awaits a few more big time prospects, especially Rashard Lawrence. The five-star defensive tackle will announce on Friday whether he’ll attend LSU or Ohio State next fall.

The three commitments OSU received today will certainly add momentum for signing day, and this is the best time for the Buckeyes to gain the spotlight. The future looks bright for Ohio State, especially after a monumental day today.

Tim is currently serving as Vice President of The Game Haus. He has been with the company since August of 2015, and has advanced from writer, to editor, to COO and now to VP. Tim writes, edits, podcasts, recruits, helps in business functions, helps with social media and focuses on developing writers and editors, among other roles. He played baseball (two-year letterwinner, all-district) and basketball (absurdly average) in high school and loves sports in general. He's currently a sophomore double-major at Cedarville University (Ohio), with majors in journalism and strategic communication and a minor in biblical studies.