Nwora is an elite scorer at all three levels he brings good size and can get his shot over the top. He’s a really good driver who can also have really good body control and pull up well in the mid-range. His three-point shot off the catch and bounce is very good and he runs the floor well in transition. He can be reckless at times and he must improve his overall decision making. In addition, he gets in a good position on defense and brings good length. His body must get stronger to really become a more effective defender. Nwora will be one of the best players in the country on a national title-contending team in Louisville.

Merrill is the best player in Mountain West Conference. He brings good activity and size defensively. He’s not the quickest on-ball defender and can get beat off the bounce. Merrill does a good job of contesting all jumpers and does a solid job of sticking to his man. He has the ability to score at all three levels and there is a great composure with a smoothness to his offensive skills. Size and length can give Merrill problems with his lack of athleticism. When he has the separation and space he’s one of the most complete scorers in the country. Merrill is looking to lead Utah State back to the NCAA tournament.

Langford moves without the ball really well and gets set with the ability to make perimeter jumpers. He can get to the basket and midrange but could develop more explosiveness to get to his spots quicker. Langford is an elite defender on the perimeter as his positioning and technique are great. Next, he is extremely engaged off the ball and is in a great position to help. Also, his active hands make him a really good defender. Further, his health will be the biggest key for him to have a great season, as he is coming back from his injury. 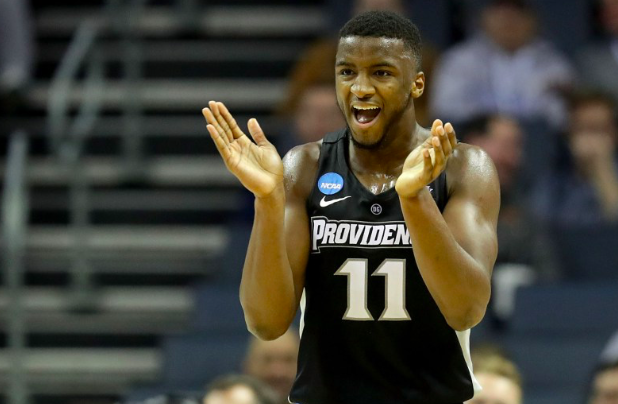 Diallo does everything a little bit of everything for Providence. His versatility is very good as he can play 1-4. The ability to go in transition is good with the ability to finish at the basket. He is able to finish with more control to be a high-level finisher. He will hit occasional threes, but must improve to be a more consistent shooter. The length and athleticism he brings as a defender is really good. His lateral quickness could improve to stay with quicker guards. Diallo’s ability to make perimeter jump shots consistently will take his game to the next step.

Marshall can get to the basket very well with his very physical body and he is extremely long. He will post up smaller players and can score effectively in the post. His ability to pull up in transition is good with a nice step-back move. For a bigger wing, he handles the ball very well and flashes in the high post effectively. The ceiling for Marshall next season is extremely high. His length as a defender causes major issues for perimeter players. He lacks great technique and positioning, however, if he can fix the little details he can be an elite player.

Snead has the ability to pull up and hit threes consistently. He’s very good with making shots off the dribble and shoots with consistent form. He has a really good head fake that allows him to get a step and get dribble penetration. His ability to get shots in rhythm is key. He brings good toughness and versatility defensively as he can guard in the post and on the perimeter. His length and footwork are really solid which makes it difficult to get by Snead. He also brings active hands and ability to stick to his man, his lateral quickness could improve as quicker guards can get by. Snead is a well rounded overall player who will be Kansas State’s go-to player next season.

The versatility of Eastern is great, as he can do a little bit of everything except shoot. He is a good rebounder with high energy and can distribute the ball nicely. He’s a point forward who could take over point guard duties with the departure of Carsen Edwards. He’s very solid around the basket with a good first step and his length. The second effort ability along with his athleticism gives Eastern the tools to continue to improve. His shot needs massive improvement as it is a major hole in his game. The length and size he brings on defense are very good. He is able to get good position and is pretty consistent on defense overall as he’s pretty sound defensively.

Lamb brings great physicality with ability to drive strong and post up very well. Also, his versatility of playing in the post and on the perimeter makes him a tough matchup. He does a real job of getting off his shot highly contested from three and still shoots a strong percentage. Further, he rebounds with great energy on the offensive end. Next, he moves his feet well enough defensively and gives good physicality guarding in the post. Lamb always makes the offense shoot contested shots. Lastly, Lamb will look to continue to dominate the American East and help Vermont make the NCAA tournament again.

A solid all-around player, Krispert has the ability to hit perimeter jumpers. He’s really good in transition he spreads the floor very well. Also, he can get in the middle for pull-ups and drives but needs to be more effective. He gives active hands defensively, has really good feet and technique. Krispert has the ability to stay in front very effectively and can guard 2-4 very well. He brings good size and consistency defensively. Overall he needs more skill offensively, but he will be the lead on the perimeter next to Admon Gilder in the backcourt.

Livers has active feet and great technique along with the versatility of guarding perimeter players and bigs make him a strong defender. His on-ball defending skills are very solid along with his ability to help. He lacks great athleticism and speed so he can get beat by better athletes. He has a good ability to be a pick and pop player. His ability to spread the floor is good, as he can really shoot it from the three. He can drive to the basket too and uses his physicality to get to his spot. The ball-handling skills can improve so he can attack gaps more effectively. Livers should be a bigger part of Michigan’s plans for next season.