Mitchell is a very productive player on both ends of the floor and is a major key to Baylor’s success. He moves really well off the basketball with the ability to make the catch and shoot threes as well as drives off dribble handoffs. Mitchell is great in transition with his athleticism and ability to get to the rim very effectively. Next, he’s quick with the ball and has good size but he can improve his ability to finish through contact. Also, he’s really good in ball screen situations allowing him to attack and pull back for threes. His ability to improve his shot off the dribble and his overall strength will allow Mitchell to get to the next level offensively. Now defensively, he is one of the best defenders in the country with his ability to harass the ball handler and his lateral movement to stay in front at all times is very impressive. His length is really good as well and he denies very effectively by forcing turnovers for transition opportunities. His overall effort and technique defensively are exceptional on and off the ball. Mitchell will be apart of one of the best teams in the country next season and look to be even more of a threat offensively.

Grimes brings good size and ability to be a lead guard with his shot-making and bringing the ball up the floor. Next, he is very solid off the dribble to get shots off and penetrating to get to the mid-range for shots. Also, he is very solid in ball screen action with good steadiness to create separation and get his shot off effectively. He’s a solid three-point shooter off the dribble and catch but could improve upon it. Furthermore, he’s a scoring guard who can make plays in transition spotting up or on the bounce. An area where he could improve is getting to the basket more in the half-court and in transition. He is also very good in isolated situations attacking mismatches very well. Defensively, Grimes is solid on the basketball who moves well laterally and has good size. He doesn’t take many chances defensively but is very solid and really good off the ball. Grimes will look to continue to develop into one of the best guards in the country and lead Houston as a top tier team in the country.

Walker has the capability to get downhill to get to the basket being strong around the rim with both hands.  Next, he is a really effective shooter from the perimeter and mid-range. He will be the lead guard for Florida State next season and should be a first team ACC player. Walker has had a ton of potential at Florida State but now should deliver those expectations in his senior season. Defensively, he must improve staying tight on shooters giving them less space. His lateral quickness and on-ball defense are solid. His overall production is pretty good but has tools to be more of a go-to player next season. Walker will have Flordia State as a top 20 team in the country and teaming up with another big-time guard in Scottie Barnes.

Baker is a clutch player with his big-time shot-making ability for Rutgers. Furthermore, he does an exceptional job of making plays off the dribble especially in late shot-clock situations. He is also really good in ball screen action situations getting downhill or creating shots. Next, his shot-making from three could improve with the ability to take the next step in that area. Also, he plays with major confidence and toughness leading Rutgers offensively, which helped them become a factor in the Big Ten. The isolation ability to score benefits Rutgers as they are not strong offensively but Baker can negate some of those issues. He also could improve getting to the basket more effectively by getting easier shots. Now defensively, he brings solid effort but can be a step behind on active players off the ball. Baker will look to lead Rutgers to be back in a position to make the NCAA tournament.

Mills has solid size and brings great shot-making ability. Next, he has really good ball quickness with the ability to get to the basket and to the mid-range very effectively. His ability to get into the lane and create separation for shots is very good. Also, he has the ability to push the ball in transition and get to the rim consistently. Additionally, he could improve on his overall shot selection and become more efficient shooting around the basket. Becoming a more consistent three-point shooter and extending his range would help. He’s very dynamic with the basketball and has a very good feel and ability to be one of the best guards in the country. As for the defensive end, he must improve his ability to guard the basketball and improve his strength. Also, he could improve his mobility on the defensive end. Mills will be apart of a deep perimeter for Houston as they are the clear favorites in AAC for next season.

Wiggins has the potential to be a knockdown shooter and a very well-rounded scorer with consistency. Furthermore, he has really good size and ability to play in ball screen action getting to the lane and making effective plays. Also, he moves really well off the ball and can be great in catch and shoot opportunities with handoffs as well as having good athleticism getting the basket well. He’s very solid with the basketball as well getting his shot or getting to the rim. All the offensive ability is there but he just needs to be consistent. Wiggins will get to showcase all of his potentials offensively without Anthony Cowan in the backcourt. Now defensively, he has good size and length and does a solid job on the ball with active hands, as well as, being active off the basketball and being engaged throughout. Wiggins should have a great junior season and unleash his potential for Maryland. 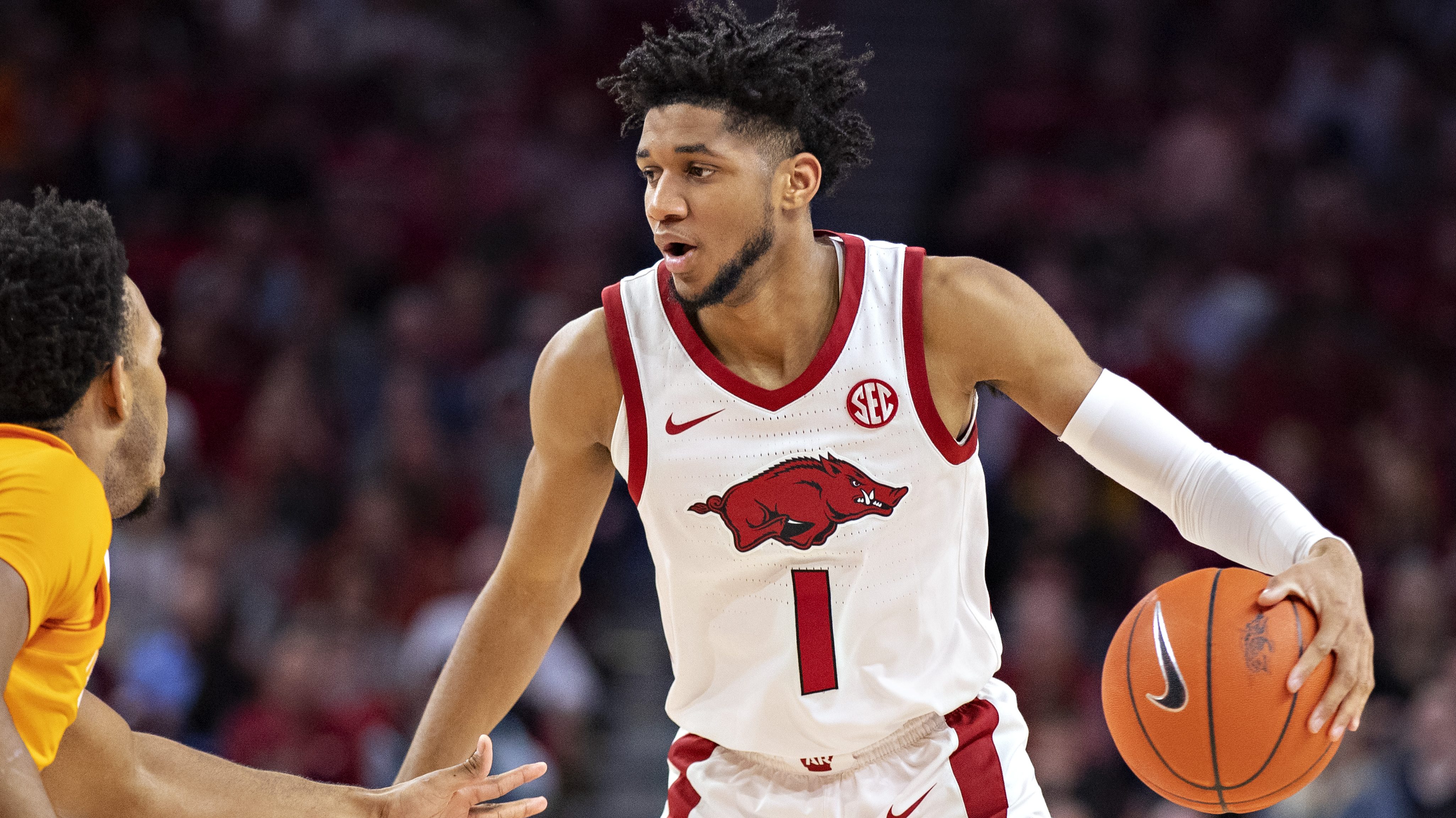 Joe brings the ability to score the basketball at a high level and is the catalyst for the Arkansas offense. Furthermore, he has a really good size which allows him to elevate really well on the perimeter and makes threes at a consistent rate. Next, he’s really good on and off the basketball being able to play multiple positions on the perimeter. Additionally, he must improve his ability to get to the basket and use his size to finish at the rim. The ability to score off the dribble is really effective and is his best trait. Also, he could improve on becoming an even better perimeter shooter being the guy for Arkansas next season. Now, defensively he has very solid length but must improve on his overall strength. He does a solid job of being in a good position and containing the ball. Joe will be one of the best scorers in college basketball and the SEC next season.

Ayayi brings really solid play in all aspects of his game. Furthermore, he is very quick with the basketball but is always in control whether in transition or in the half-court using ball screens to get the basket effectively. Next, he brings really good athleticism and versatility to Gonzaga with his ability to play multiple positions. Continued, he could be more crafty finishing around the basket in which he could take the next step with a finish through contact at the rim. Additionally, is a very solid catch and shoot player from three and can be dependable. The poise of Ayayi throughout is very impressive and he will continue to develop a more well-rounded game offensively to be one of the best perimeter players in the country. Now defensively, Ayayi brings really good length with solid size who is very good on the ball but also is really active off the ball looking to create turnovers. Ajayi should develop into one of the best two-way guards in the country next season for Gonzaga looking to capture a National Championship.

Boston has the ability to be a really good athlete and will be a dynamic player for Kentucky in transition. Next, he will pair up very well with two other freshman guards in Terrance Clarke and Devin Askew. His overall strength is an area in which he must improve to be a more physical player on both ends. Further, he is a very good scorer with the ability to score at all three levels. Boston should flourish in the Kentucky system in his freshman campaign.

Duke had a very good season playing more off the basketball than the previous season. Furthermore, he contributes to all aspects of the game for Providence. He can be dynamic in transition with his ability to get to the basket with his athleticism. Also, he does a good job of contributing on the boards on both ends. Additionally, he shot the ball very well from three of catch and shoot opportunities. His ability to finish at the rim is really solid and his improved strength has been a key. Duke could improve his ability to make shots off the dribble and finish through contact more often. Duke’s overall confidence on the offensive end has improved very well is becoming a consistent scorer for Providence. As for the defensive end, he has really good size and moves really well on the ball. He does a very solid job of taking charges and has solid length contributing to turnovers. Duke will be apart of a very strong backcourt with A.J. Reeves and Jared Bynum for Providence next season.

FedEx asks the Washington Redskins to change their name

Is the Broncos Defense Worse than Last Year?