Mid-Season Coaching Changes and Why There Is…

Esports and Gambling: A Complex Relationship

Eric Musselman has a diverse background of working in the NBA and college basketball. His time spent in the NBA was as a long-time assistant. He had two separate head coaching stints with the Golden State Warriors from 2002-2004 and with the Sacramento Kings from 2006-2007. In addition, his experience in the D League is a big part of his appeal being able to have knowledge on both sides of professional basketball in the U.S. Next, he went to college basketball starting in 2012 working with Arizona State and LSU as an assistant. The diversity makes Musselman a well rounded and experienced coach at all levels.

His time at Nevada was nothing, but a major success. The ability to take Nevada to a top 10 team in the country is a remarkable accomplishment. His overall record was 110-34 during his time and he won three consecutive Mountain West Conference titles. He also took Nevada to the NCAA tournament three straight seasons along with a Sweet 16 appearance in 2018. The ability to bring in great transfers and develop them made his time at Nevada a great success. Also, Musselman showed he could bring in high-level recruits landing a five-star prospect in the 2018 class in Jordan Brown. He succeeded quickly at Nevada and made them a national power.

Musselman will look to succeed as quickly as possible bringing in graduate transfers. The ability to bring in players who can fill out a roster is very important to success. Also, keeping a solid core of players from the previous regime. Isaiah Joe, Jalen Harris and Desi Sills with the addition of Jimmy Whitt will give the Razorbacks a dynamic backcourt. The development of the frontcourt will be important with replacing Daniel Gafford. Therefore, Reggie Chaney, Gabe Osabuohien, Emeka Obukwelu and Adrio Bailey will be very important. Musselman has the pieces in place to have a successful start at Arkansas and should improve quickly. 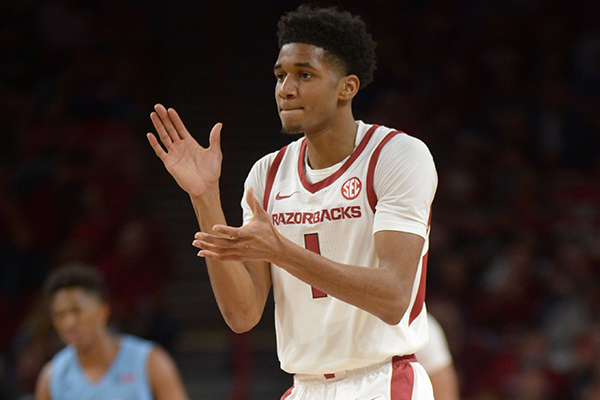 Musselman made his success at Nevada based off transfers. He will continue to have success at Arkansas by adding transfers at a very high rate. They have already added Jimmy Whitt, Jeantal Cylla and Connor Vanover. Whitt will be the most impactful transfer who is immediately eligible and is highly regarded. The ability for Musselman to add transfers who can immediately help will improve the immediate success. Also, with the ability to develop a player who sits a year out is a huge advantage to continue to develop a strong team. The NBA experience of Musselman makes him an attractive draw for transfers looking to play at the next level. Mussleman’s success will be predicated on the ability to bring in high-level transfers who can develop and mesh in with current players on a consistent basis.

This must become an arena that is one of the most difficult places to win in the country. The environment of Bud Walton Arena is electric, so home-court advantage can become a huge boost for Arkansas. In addition, with the continued development of the roster improving each year this building must become nearly impossible to win in. This arena has the capability to become one of the best home courts in the country. In order to have success in the SEC, they must have great success at Bud Walton Arena.

Musselman will turn Arkansas into a transfer destination for many players looking for a new opportunity. There is great optimism for immediate success for Arkansas with the backcourt lead by Whitt and Joe. The NBA background of Musselman gives him a great opportunity to attract transfers and high-level recruits who want to get to the NBA. He will have the ability to attract really good talent to Arkansas on the recruiting trail. Also, Bud Walton Arena must become a place that is extremely difficult to play and become one of the best home courts in the country. Transfers will determine the success of Arkansas. As Musselman showed at Nevada he can add transfers and make them into a national power. Musselman will look to create his success again at a higher level at Arkansas.

Josh McCown to Retire From NFL