Scott Drew has the best team in the country and is led by one of the best players in Jared Butler. Butler plays with great composure throughout games and is very solid in all areas. He’s a big shot maker and is a three-level scorer with very good efficiency. Next, his backcourt counterpart in MaCio Teague is a very strong scorer and really effective on the boards. Davion Mitchell is very smooth and has the ability to play very well off the basketball. Now, the glue of this team is in the frontcourt with Freddie Gillespie and Mark Vital. Gillespie went from a Division III player to a walk-on at Baylor. He is incredible with his rim protection and ability to clean up the boards. Furthermore, Vital is a swift army knife and will do whatever it takes for Baylor he can guard 1-4 and is relentless on both ends. Baylor is very solid on the defensive end as a team with their ability to play man and mix in a 2-3 zone as well. Drew’s team has an opportunity to be the number one overall seed and be favorites heading into the NCAA tournament. 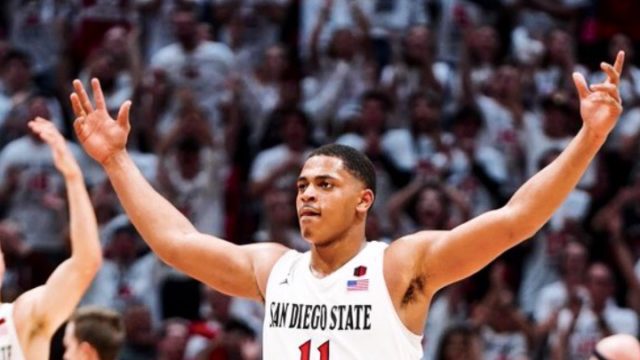 Brian Dutcher has his team playing very good basketball sitting at 23-0 with an opportunity to go unbeaten into the NCAA tournament. This is a very well rounded offensive team that can attack from the perimeter and inside. Further, the steadiness of the point guard play of K.J. Feagin has been exceptional. As well as, having a lead scorer on the perimeter in Malachi Flynn who can make big shots as well as get to the basket. Next, Yanni Wetzel is very effective for the inside along with his ability to shoot and stretch the defense. In addition, Matt Mitchell is coming off a great game and he provides very good versatility on both ends and is a matchup problem. If they get Nathan Mensah back this team will only get bigger and harder to defend. As for their defense, it is led by K.J. Feagin with his on-ball pressure setting the tone for a very good San Diego State defense. Dutcher has a team that is capable of winning big in March.

Florida State is normally known for depth, quality in numbers with no lead guy. However, that is not the case this year as Devin Vassell is becoming their man. Furthermore, he is a marksman with the ability to make the catch and shoot 3s as well as off the dribble. Vassell is averaging 13.9 points a game along with 5.1 rebounds a game. He is also shooting 50.7 percent from the field and 44.3 from 3-point range. Vassell is turning into a go-to scorer for Florida State who they can turn to when the offense is stalling. He has an opportunity to lead Florida State to an ACC title along with, a potential Final Four appearance in the NCAA tournament.

The Big East is a battle from top to bottom with no easy games. This was again proven on Saturday with the two top teams in Villanova and Seton Hall losing at home respectively to Creighton and Xavier. The top will come down to the likes of Villanova, Seton Hall and Creighton. Butler has the pieces when fully healthy. However, the middle and bottom of the conference can be a nightmare for teams. DePaul who is in the last place owns a win over Texas Tech and with a combination of Charlie Moore and Paul Reed they can beat anyone on a given day. Marquette has Markus Howard, who can single handily take over a game. Xavier is gritty and tough with big players in Naji Marshall and Tyrique Jones. Georgetown and St. John’s have two strong-minded teams led by Patrick Ewing and Mike Anderson respectively. In addition, Providence is never an easy out with Ed Cooley and company. The Big East is as tough of a conference top and to bottom in the country.

Will Wade has his team 8-0 in SEC play and back in the national picture. Their success starts with the play of Ja’Vonte Smart who has increased his ability to score along with his physical style defensively. They also have been getting really good versatility from Darius Days on the wings and inside with his athleticism. Next, Skylar Mays provide very good consistency on both ends for LSU. In addition, the frontcourt is very athletic and versatile in Trendon Watford and Emmitt Williams giving teams difficulty in matching up. Furthermore, they are getting very solid minutes off the bench with Marlon Taylor and Charles Manning. Wade has an opportunity to win another SEC regular-season title.