Michigan State needs to prove that they are legitimately able to take over the Big Ten that starts against Penn State. Cassius Winston needs to have a very good game against a Penn State backcourt that lacks great experience. In addition, Xavier Tillman needs to have a strong effort against Lamar Stevens and Mike Watkins in the frontcourt. They also need to get solid production from Aaron Henry providing scoring and good defense against Myreon Jones. The emergence of Rocket Watts must continue for Michigan State giving another ball-handler and perimeter scorer. Furthermore, the transition offense of Michigan State needs to be very good to set the tone.
As for Penn State, Stevens needs to use his versatility against Michigan State with his ability to be a nightmare matchup. Also, Watkins needs to provide toughness inside and easy offensive opportunities. Next, Myreon Jones needs to be very effective in this matchup and continue to be a perimeter threat. The matchup of Jamari Wheeler needs to contain Aaron Henry on the perimeter with his length and athleticism. The x-factor for Penn State can be Myles Dread off the bench with his scoring ability. Michigan State will come away with a very good win against Penn State.
Prediction: Michigan State 68 Penn State 61 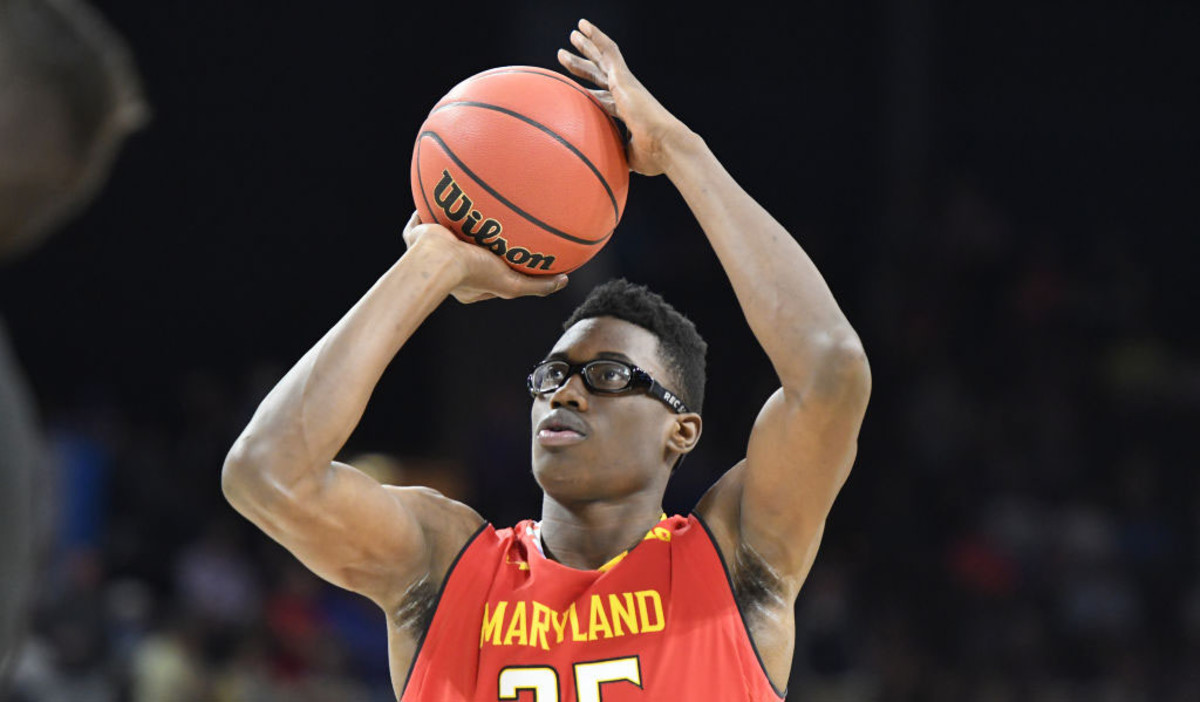 Maryland is starting to come into form with a team that is loaded with talent. Furthermore, Jalen Smith is starting to dominate his opponents with his ability to step away and make 3s consistently along with his presence inside. Next, Anthony Cowan must continue to be the lead guard for Maryland and takeover games when it is necessary to do so. Aaron Wiggins needs to be able to make big shots from 3 on a consistent basis that is vital for Maryland’s success. Also, Darryl Morsell can guard Geo Baker and with his size, he can disrupt his flow. Maryland must be prepared for a tough game against a Rutgers team that is very physical.
As for Rutgers, this is an opportunity to prove they can win quality games away from the RAC. Further, Ron Harper Jr. must continue to be consistent inside and provide that physicality as he’s undersized. Also, Baker must continue to be the go-to scorer for Rutgers against Anthony Cowan. In addition, Montez Mathis is beginning to emerge for Rutgers with his athleticism as an attacking guard on the perimeter. Next, the biggest key for Rutgers will be containing Jalen Smith and Akwasi Yeboah will be a task to do so for Rutgers. Maryland has too much talent for Rutgers to handle in this matchup.
Prediction: Maryland 74 Rutgers 64

Arkansas has a major opportunity to come away with a big win against Auburn. The play of Mason Jones will be key as he has the ability to go off in a moment. In addition, Jimmy Whitt has that same ability as he showed against Alabama. Isaiah Joe is also a major threat on the perimeter for Arkansas creating a three-headed monster. If this perimeter for Arkansas has two of three of Jones, Whitt and Joe go off they will have a great opportunity. Now, the key for Arkansas will be containing Austin Wiley on the boards and Reggie Chaney will be tasked with that responsibility. They will also need to defend Samir Doughty at a high level will be key.
For Auburn, they are coming off a huge win against Kentucky and are looking to build on that. Furthermore, J’Von McCormick will need to play at a high level against a very good backcourt for Arkansas. Samir Doughty is a very good scorer in this game. In addition, Danjel Purifoy must use his size against Arkansas to get looks offensively. Next, Issac Okoro needs to continue to emerge as a scorer attacking the basket and locking down parts of Arkansas’ perimeter. Continued, Austin Wiley needs to be a dominant force inside against the lack of bigs for Arkansas. Furthermore, the perimeter defense for Auburn will be the key in this matchup. The backcourt for Arkansas will have a massive day and come away with a huge win over Auburn.
Prediction: Arkansas 75 Auburn 72

Butler must come away with a massive win against Villanova to get back on track. Kamar Baldwin needs to be more consistent at the beginning of games to get Butler off to a good start. In addition, Sean McDermott must be that secondary scorer on the perimeter for Butler making key 3s. The Bulldogs also need to get very solid production in the interior with Bryce Golden and Bryce Nze. Also, Jordan Tucker must elevate his game as a scorer without Aaron Thompson in the lineup. The x-factor for Butler could be Khalif Battle off the bench to provide great defense. Butler as a whole needs to more effective offensively especially against an offensive team in Villanova.
Villanova is coming off a home loss to Creighton. Collin Gillespie needs to have a huge game against a great matchup in Kamar Baldwin. In addition, Jeremiah Robinson-Earl has an opportunity to have a huge game against the Butler frontcourt. Next, Justin Moore needs to continue to be that bench presence for Villanova. A key for Villanova moving forward is Jermaine Samuels who must be a consistent threat for Villanova as it causes matchup issues. Villanova must handle the physical play of Butler and be able to run their offense effectively. Butler will get a huge performance from Kamar Baldwin who leads them to a massive win.
Prediction: Butler 66 Villanova 62

Arizona has an opportunity to get on a roll in the PAC-12 it starts against USC. Now, the matchup to watch will be inside with Zeke Naji against Onyeka Okongwu and Naji must be able to handle his physicality. In addition, Nico Mannion must be able to continue to control his matchup and score effectively consistently. They also need continued production from the veterans in Jemarl Baker Jr. and Max Hazzard who can give instant offense. Now, Josh Green must shutdown the perimeter of USC specifically taking away Jonah Mathews. Arizona needs to consistent play from veterans to reach their potential.
As for USC, they must bounce back from their loss against Colorado. A key in this game will be for Okongwu to dominate inside against Naji using his strength. Next, USC needs Jonah Mathews to be a volume scorer for USC on the perimeter. Also, Isaiah Mobley and Nik Rakocevic need to use their size against Arizona and try to dominate the paint against Arizona. They also need more consistent play from the perimeter with Ethan Anderson and Elijah Weaver. Arizona will get big games from their backcourt leading them to a win over USC.
Prediction: Arizona 74 USC 67

Minnesota Rokkr: What Modes are Their Strengths and Weaknesses?

5 AL Players who can have a Breakout Season in 2020