Steph Curry to Return on Sunday

OWL Week 3 Stonk Market: Who and…

Back to the Drawing Board for the…

Not Done Yet! Vitality Week 5 Pre-Review

Duke will be looking to rebound after a loss on the road to Clemson. To start, Matthew Hurt needs to be a big factor for Duke on the offensive end while minimizing his defensive liabilities. Next, the matchup of Vernon Carey Jr. against Steven Enoch will be crucial for Duke’s success. In addition, Tre Jones has a major opportunity to take advantage of Louisville’s point guard play of Fresh Kimble and Darius Perry. Also, Alex O’Connell needs to step up as perimeter shooter for Duke especially in the absence of Joey Baker. Lastly, Cassius Stanley is playing at an extremely high level and will need to play well against Jordan Nwora.
As for Louisville, they need to get great production from Jordan Nwora in this game offensively, as well as, continuing to get the production from Dwayne Sutton in all aspects with his versatility. Also, the point guard play for Louisville will be crucial against Jones therefore, Kimble will need to play well. In addition, Enoch will have the ability to affect the play of Carey Jr. and can negate his production. Louisville will need to keep Duke out of transition and take care of the basketball limiting live-ball turnovers. The play of Tre Jones will be the deciding factor in this game for Duke and will get them the win over Louisville.
Prediction: Duke 76 Louisville 71 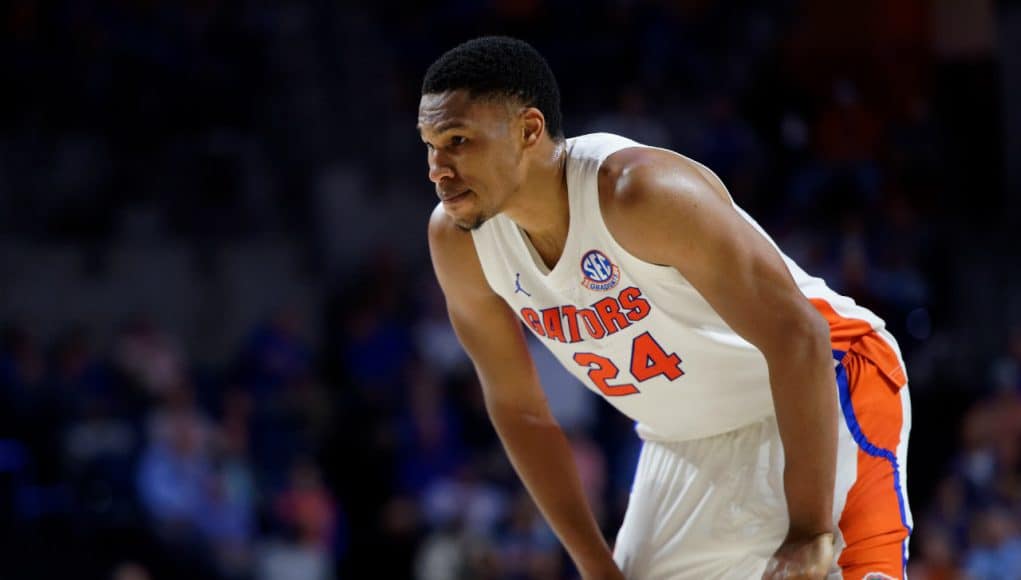 Auburn has an opportunity to prove their record with conference play here. The veteran-laden team is being led by the play of Samir Doughty. Him being the catalyst on the offensive end has been crucial for Auburn. Next, the ability for J’Von McCormick to step up in place of Jared Harper has been impressive. As with his ability to get to the basket and initiate the offense. Also, the health of Austin Wiley has been huge and he will have a tough task containing Kerry Blackshear Jr. who is capable of having a huge game. In addition, the versatility defensively from Issac Okoro has been huge for Auburn and he will continue to grow into an offensive threat. Auburn, will need to make big shots against a very solid defense in Florida.
For Florida, the play of Keyontae Johnson has been exceptional for Florida and will need to have a massive game against Samir Doughty. Next, Blackshear Jr. must start to dominate the way he is capable of against Austin Wiley in this game. Furthermore, Andrew Nembhard must use his size and strength against the less physical J’Von McCormick. They will also need major production of the bench in Scottie Lewis who needs to have production driving to the basketball and Tre Mann who needs to knock down big shots. Florida will prove itself to be a capable team in the SEC with a huge win over Auburn.
Prediction: Florida 63 Auburn 59

Maryland cannot seem to win on the road therefore, they must be able to dominate at home. To start, Anthony Cowan must continue to play as one of the best point guards in the country against Purdue who lacks a true point guard. Next, Jalen Smith must be able to handle the physicality of Trevion Williams, but also stretch him out on the offensive end. Also, Aaron Wiggins must be able to make big shots for Maryland and he is more than capable. Further, they will need more production out of Eric Ayala who can be productive against Eric Hunter and Aaron Wheeler. Darryl Morsell’s versatility will be key against the wings of Purdue. Chol Marial has to step up against the two bigs of Purdue in Trevion Williams and Matt Haarms.
Now, with Purdue, the play of Trevion Willaims must continue to be at a high level and be a force inside. In addition, Aaron Wheeler and Eric Hunter will need to play extremely well against the deep perimeter of Maryland. Furthermore, Sasha Stefanovic has the ability to be a game-changer for his 3-point ability. Purdue is a very solid team defensively and will need to able to stall the Maryland offense that has struggled to score at times. Maryland will get the much-needed win at home against Purdue.
Prediction: Maryland 69 Purdue 62

Arizona is a very capable team, but is young and needs its veterans to play like veterans more consistently. That starts with the play of Chase Jeter inside being able to be a physical presence against Evan Battey in this matchup. They also need perimeter production from Dylan Smith and Max Hazzard against a very solid perimeter of Colorado. As for their freshman, the play of Nico Mannion sets the tone and will have a very good matchup against McKinley Wright for Colorado. Also, the size and athleticism of Josh Green will be crucial against Tyler Bey in this game. The productivity of Zeke Nnaji will need to be there because Colorado lacks the athletic bigs.
Colorado has had a very solid season with Wright leading the way. He will need to step up against Nico Mannion. Also, Bey must continue to be a versatile scoring threat for Colorado and attack Josh Green. In addition, they have gotten major play out of Evan Battey who’s physicality can be a major factor in the interior of this game. The other pieces of Colorado’s perimeter with D’Shawn Schwartz and Shane Gatling’s ability to make shots will be crucial. Arizona will find a way to get a major home win over Colorado.

This will the test Arkansas in Eric Mussleman’s first season with a huge opportunity in Bud Walton Arena against Kentucky. The play of Arkansas’ perimeter has gotten them off to this terrific start. Mason Jones has been a huge part of that with his defense and scoring ability. Also, the play of Isaiah Joe has been crucial with his scoring prowess. Therefore, he’ll be in a huge matchup against Ashton Hagans. Next, Desi Sills and Jimmy Whitt will need to continue to play at a high level and take advantage of Kentucky’s wings who are inexperienced. The most crucial aspect for Arkansas will be their interior defense and rebounding against the likes of Nick Richards and E.J. Montgomery and Nate Sestina. Arkansas will win this game from the perimeter, but also containing Kentucky’s damage in the paint.
For Kentucky, this is a game where Nick Richards needs to continue to be one of the best bigs in the country and dominate. Further, E.J. Montgomery needs to evolve into the player he can be along with Nate Sestina having a big game too. Now, the Kentucky backcourt must be great with Tyrese Maxey and Ashton Hagans producing on both ends. They still need to get the continued production from Immanuel Quickley. Kentucky will win this game if they can dominate the paint. The interior play of Kentucky led by Nick Richards will be too much for Arkansas to overcome in this matchup.
Prediction: Kentucky 72 Arkansas 67