Crown in NA, Will start for CLG…

‘The Heist’ Returns for Season 3

A statement in defeat: Takeaways from Misfits’…

Call of Duty League to be broadcasted…

With Crown out, CLG looks to Tuesday…

Baylor is coming off a big win on the road against Texas Tech. The balance that Baylor displays give them role continuity in their rotations. Next, the play of Tristan Clark and Freddie Gillespie will be crucial in the interior against Udoka Azubuike. In addition, the point guard battle will be fascinating with Jared Butler and Devon Dotson going head to head. Further, the key will be MaCio Teague being able to score the basketball against the secondary guards of Kansas. Again, the production of Mark Vital defines this Baylor team as his versatility and willingness to do anything for this team sets the tone.
As for Kansas, Devon Dotson must be able to use his speed and quickness against Jared Butler to get to the basket. In addition, Isaiah Moss must be able to make perimeter jumpers for a team that can struggle to shoot the ball at times. Furthermore, Udoka Azubuike will need to establish himself inside for Kansas and be very effective. Also, Marcus Garrett’s defense will need to be there against the Baylor backcourt to slow down their production. If Kansas slows down the perimeter of Baylor and can make crucial threes they will win this game. The Phog will be too much for Baylor and Kansas will prevail in this game.
Prediction: Kansas 70 Baylor 65 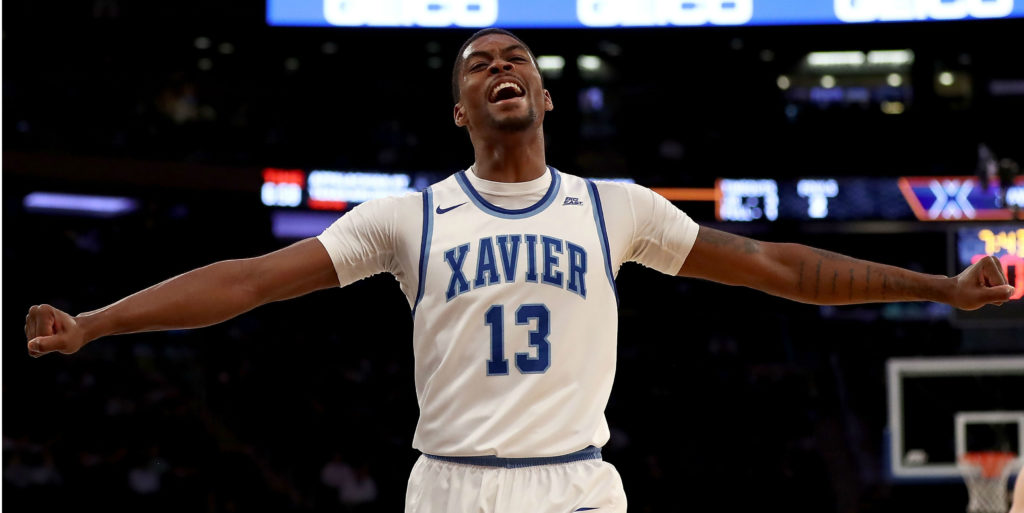 Creighton is looking to bounce back from a tough loss against Villanova. First off, the play of Ty-Shon Alexander needs to be effective as a scorer for Creighton and will have a difficult time against Quentin Goodin. Next, the versatility of Damien Jefferson will be big in this game against a matchup like Naji Marshall who also brings size and versatility. In addition, the catalyst offensively for Creighton in Marcus Zegarowski needs to have a big game as a scorer and distributor. Furthermore, Christian Bishop has given Creighton a spark inside and could play a big role against Xavier.
As for Xavier, they must take advantage of Tyrique Jones inside as Creighton doesn’t have the size and physicality to match. Also, Naji Marshall needs to be very productive as the leading scorer for Xavier against Damien Jefferson. The guard play of Xavier will be crucial in going against the dynamic backcourt of Creighton. KyKy Tandy could be an x-factor off of the bench for Xavier in this game. The physicality of Xavier will produce a big win against Creighton
Prediction: Xavier 68 Creighton 63

Penn State needs to respond with a win after losing on the road to Rutgers. To start, Lamar Stevens must use his size and versatility against the Wisconsin front line in Nate Reuvers and Aleem Ford. As well as, getting major scoring from Myreon Jones on the perimeter. Further, Jamari Wheeler and Myles Dread need to produce on a higher level as both didn’t score against Rutgers. Another key will be for Mike Watkins to remain out of foul trouble and be effective on both ends for Penn State.
For Wisconsin, the backcourt needs to take advantage of an inconsistent backcourt for Penn State. Therefore, D’Mitrik Trice and Brad Davison need to produce at the level they’re capable of. Also, Kobe King has played well for Wisconsin and needs to be able to attack the basket effectively. In addition, Nate Reuvers and Aleem Ford will have big responsibilities containing the front line for Penn State. The play of the front line for Penn State will be too much for Wisconsin to handle in this game.
Prediction: Penn State 69 Wisconsin 56

Michigan State will look to continue the success they have had against Purdue on the road. The confidence is back for Cassius Winston and he should be able to build on the success against Purdue who’s backcourt is not their strength. Xavier Tillman needs to build off of his play against a formidable front line with Matt Haarms and Trevion Williams. In addition, Aaron Henry has to continue to show the ability to score the basketball against Nojel Eastern and Aaron Wheeler in this matchup. Next, Kyle Ahrens has provided a spark to Michigan State with his toughness and ability to make big shots. Rocket Watts must continue to develop into a scorer for the second unit. Michigan State is starting to figure things out at the right time.
As for Purdue, the interior for this team must become their strength with Matt Haarms and Trevion Williams. In addition, the shot-making from Sasha Stefanovic must continue to be there. The defense needs to have Nojel Eastern take away the other team’s best options. Also, Aaron Wheeler and Jahad Proctor need to be reliable scorers for Purdue consistently. Michigan State will be too much for Purdue to handle in this game.
Prediction: Michigan State 76 Purdue 63

Oregon State has an opportunity to prove itself in the PAC-12 against Arizona in this game. That starts with the play of Tres Tinkle who has a matchup against Arizona he can take advantage of. Further, the play of Ethan Thompson is crucial as he needs to score at a high level and contain Nico Mannion on the other end. The emergence of Zach Reichle needs to provide an additional option next to Tres Tinkle. Kylor Kelley will be vital in the paint with rebounding and rim protection against Arizona and specifically Zeke Nnaji. Oregon State needs its stars to be very good in this game.
Now, with Arizona, there needs to be consistent with their play as a whole. The production needs to be spread out with guys like Max Hazzard, Dylan Smith, Jemarl Baker providing key minutes and scoring. Also, Zeke Nnaji will need to continue to be efficient inside Kylor Kelley. Next, Jalen Green could have a difficult task of guarding Tres Tinkle and will need to contain him throughout. As with Nico Mannion, he needs to be the general of this team and own the tempo of the game is extremely effective. The Arizona depth will be too much for Oregon State to overcome in this matchup.
Prediction: Arizona 78 Oregon State 68