How Each Spark Player’s Main Will Be…

A Statistical Analysis of MAD Lions So…

Roster Shake-ups in the TCL

Fans’ Concerns for the Dynasty

Lawrence has a very good step through move off of the catch. He has the ability to create space to get great perimeter shots off. He’s very long and athletic. Lawrence runs the floor well in transition, along with being a solid slasher and cutter. He’s shot ready at all times and has very a consistent shot form. The size and length he posses make him a good defender. There must be improvement off the ball, as he gets out of position a lot and can give up shots and drives. He will improve on defense if he improves his positioning. Lawrence is capable of a big jump in his junior season.

Pickett has a tendency to take chances on drivers and lacks the quickness to recover to shooters. He has very good length and does a good job distributing players the ball. His lateral quickness is not great and he can struggle to stay in front of quicker guards. He’s an average shooter and scorer. His ability to hit open shots is good, however, he lacks the great skill to be a multidimensional player. Pickett runs the floor really well in transition, especially as a spot-up shooter. The overall skill set for Pickett must improve in order to become a more well-rounded player. 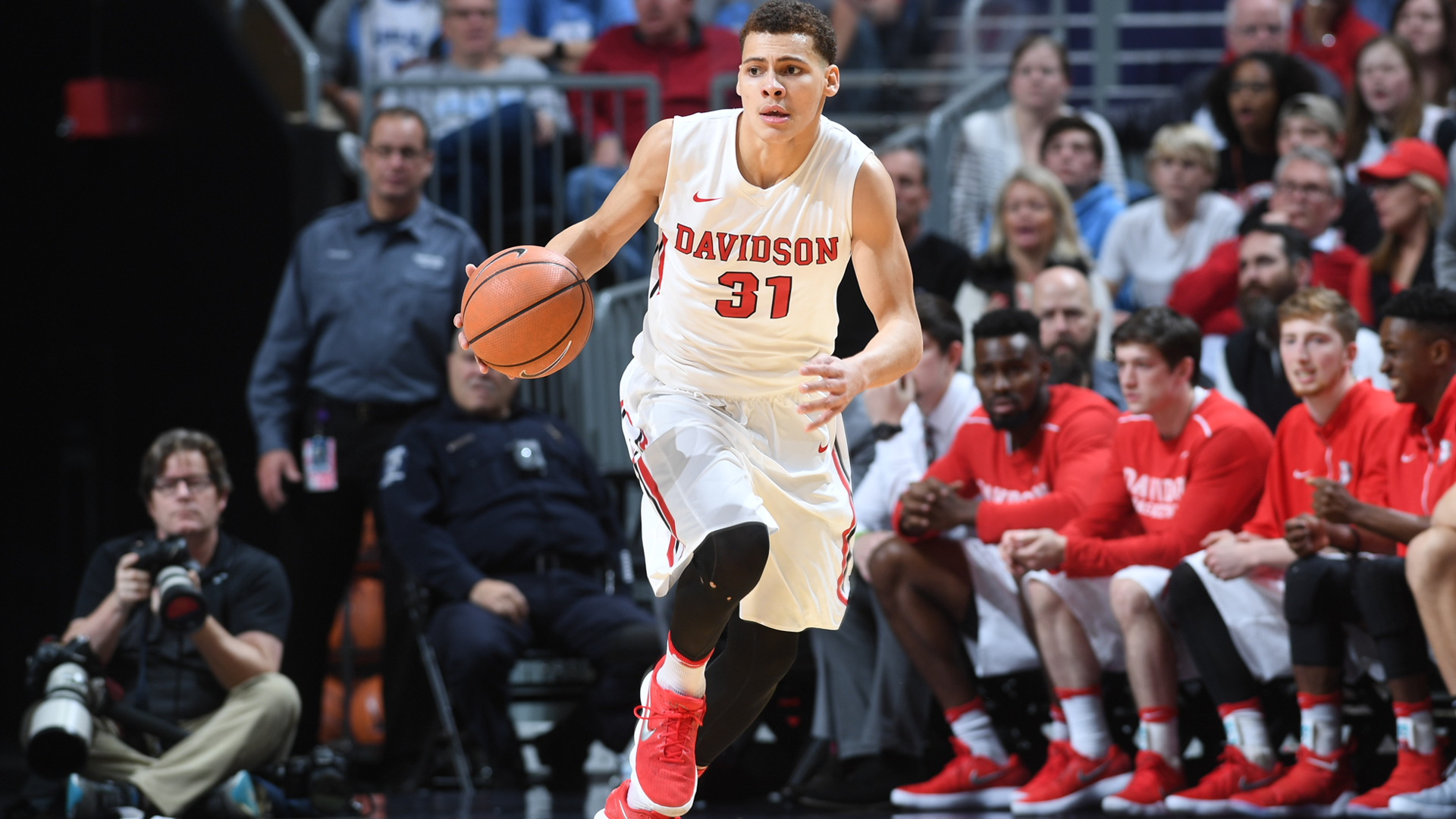 Grady is a really high IQ offensive player who can cut very effectively. He’s a great mid-range and perimeter scorer and is Davidson’s go-to player. His foot speed is not great, but he brings solid technique and effort on defense. He’s pretty active off the ball being engaged in position to help. His movement without the ball is top level. He plays with a very good feel and composure. Furthermore, he lacks great athleticism, therefore, he can struggle to get by guards to get to the basket. He will be looking to lead Davidson to the NCAA tournament next season.

Alexander is a bucket getter who can fill it up in quick spurts. He can move without the ball well and cuts to the basket efficiently. His ability to score at all three levels is really good. The shot selection can be questionable at times. He’s a strong driver as well with his size and good skills. He brings really good length, but he lacks great activity on defense. He could use better positioning defensively. Alexander will be a volume shooter and a leading scorer for Creighton next season.

Jones is very athletic with really good size and length who is capable of denying the ball exceptionally. His lateral quickness and ability to stay in front is very solid. His energy with the ball needs improve to be an elite defender. The athleticism is there, but the overall skillset needs to improve greatly. He has the ability to flash in the middle and attack the basket with his size. He’s an inconsistent shooter who must improve his shot making ability. He must continue to be an opportunistic driver to get easy points. Jones needs further development to really have an impact at Alabama.

He’s an exceptional post option with really good athleticism and toughness. His ability to get his spot while attacking in the post is really good. He runs the floor very well in transition and his finishing ability around the basket is really good. He gets solid positioning and can face up bigs and attack them. The ability to get in a great position on defense is big for Santos-Silva. His activity on the boards is very good. He’s one of the most complete post players in the country with double-double potential for every game. He will lead VCU back to the NCAA tournament next season.

Williams brings really good length, size and athleticism. His overall activity defensively is really good. If he continues to build his body he could be a dominant post defender and rim protector. He gives activity offense with his movement and screening ability. Also, he can face up and shoot over the top. He has the ability to step away and make perimeter jump shots. He operates very well in pick and pop action. Williams has the potential to really take the next step with continued skill development.

Thompson has the ability to go downhill and get to the basket along with using runners. He is a spot up shooter with a decent three point jumper. The efficiency he plays with is very good as he plays with good feel and gets others involved at a high level. His overall shot making ability needs to improve as an overall scorer. He brings very good effort and energy on defense. Thompson’s technique and ability to move his feet are great and his on-ball defense is very good with great hands. He is a very smart defender as he reads the offense effectively and gets through screens clean. Thompson needs his offense to grow to take the next step in being a complete player.

He’s not very quick on his feet and lacks great ability to stay in front. He does bring active hands and he can get deflections with good effort. Furthermore, he does get a hand up on every shot as he’s always contesting jumpers. He’s a very effective pick and pop player who operates well in movement and operates around the basket well. He has a good feel and shoots spot up threes well when in rhythm. He gives a really good effort on the boards and crashes well. The overall skill set of his offense is very solid as he can do it all pretty well. He could be a better ball handler so he can attack the basket more. Moorman will be a big part of Temple’s success next season.

Russell is a bucket getter who must improve on being a more efficient shooter. He can get to the basket with his quickness and create space on the perimeter to get shots off. His ability to hit big shots and make tough ones is there, but he must become a more willing passer. The speed he has is top-level which always helps him to get to his spots. If he increases his efficiency he could be one of the best players in the A-10. He brings great energy and effort on defense and his on-ball skills are good. His lateral quickness is exceptionally good, but his slight frame is the biggest issue as he can get beat physically by bigger guards. Russell has a high ceiling for next year at Rhode Island.

John is a bruiser and gives Marquette toughness on the boards and defensively. The rim protection skills by John are very good, as he’s willing to do whatever is needed to alter shots at a high level. He moves his feet very well, but his smaller size can be an issue against post players that have a big size advantage. His active on the offensive boards is good giving second chance point opportunities. In the post, he has a decent spin move and a solid hook. The edge and toughness are what he brings most importantly to Marquette.

Pierre-Louis a tough guard who has a really good ability to get downhill. He is great in transition and his first step is quick. His mid-range and fishing ability around the basket is very solid. He rebounds extremely well for a guard with great effort. The lateral quickness he has is solid and he gives solid effort defensively. His physicality helps him contain drivers. Pierre-Louis will be looking to lead Temple back to the NCAA tournament under first-year head coach Aaron McKie.

Carter has great size, lengt, and athleticism. He moves his feet very well and in the 2-3 zone, he can make it very difficult to reverse the ball. He has the capability to attack the basket strong. Also, he can shoot the three pretty well in spot-up situations. He could improve on being smoother with the basketball and improved ball-handling to elevate his game. Carter has a high ceiling with his athleticism.

White gives toughness inside for Houston and positions himself well in the post. He has the ability to step away and hit baseline jumpers effectively. He moves without the ball effectively getting himself in position to make plays happen and can face up. He has solid foot speed and a pretty good size. His ability to guard in the post and attack bigs is pretty good. White is looking to be a big force inside for Houston next season.

Collins is a go-to scorer for USF and can score at all three levels. The ability to push the ball in transition and attack is there. He is great at attacking gaps and getting to his spots. Collins at times will post up and can hit perimeter jump shots at a decent clip. He must become a more consistent shooter to take the next step. His lateral quickness is pretty good and his on-ball defense is solid. He brings really good length and gets through screens very well. He contests drives very well and gives consistent effort defensively.

League of Legends: TL vs iG is Brayzy’s Match of the Week