Michigan State is led by the best player in the country with Cassius Winston who plays with great poise. Also, Aaron Henry will be looking to elevate his game to the next level on the perimeter. In addition, the interior will very tough as always led by Xavier Tillman along with Jules Marble and Marcus Bingingham Jr. Further, they will have a spark off the bench in Rocket Watts who will be able to give Cassius Winston rest. Josh Langford (currently injured) is the x-factor for this team as he can add great scoring and defense if healthy. Michigan State is shaping up to have a great season with veteran leadership.

Seton Hall will be led by the game’s best scorer in Myles Powell. In addition, this team is very deep with multiple options in the backcourt. Furthermore, with Myles Cale, Quincy McKnight and Jared Rhoden who could be the team’s biggest X factor. Also, the frontcourt has many options with Taurean Thompson, Ike Obiagu, Romaro Gill and Sandro Mamukelashvilvi. In order, for this team to reach its full potential Tauren Thompson must become more of a complete scoring threat. The depth of this team will give them an opportunity to play aggressive. It will be easier because they have a go-to player in Myles Powell who can get hot and carry this team if needed.

Villanova has a very versatile team led by two dynamic forwards in Jermaine Samuels and Jeremiah Robinson-Earl. Also, the team has a true point guard in Collin Gillespie who is ready to lead this team. Furthermore, the dynamic freshman in Bryan Antoine will give a great scoring punch and defense. They have very good perimeter depth with Saddiq Bey, Justin Moore and Brandon Slater. The culture of Villanova meshed with the talent will lead this team to have a very successful season.
Kansas
Kansas will have the most complete roster in the country led by the most dominant big with Udoka Azubuike. Also, Devon Dotson is the quickest point guard in the country who’s all-around game is going to be great. In addition, the perimeter will have a knockdown shooter in Isaiah Moss alone with Marcus Garrett and Jalen Wilson’s versatility. Further, the inside prescience with Silvio De Sousa, David McCormick and Mitch Lightfoot will make them a dominant interior team. The biggest factor for this team will be the development of Ochai Agbaji who’s toughness and scoring will be lethal. Kansas is set to have a major bounce-back season.

Player of the Year- Myles Powell

The ability for Myles Powell to score at all three levels effectively makes him the choice for Player of the Year. He also has the ability to carry a team that will play in high-level games throughout the season. In addition, his ability to have as much influence on any team sets him up to be in a position to win this award.

Coach of the Year- Kelvin Sampson 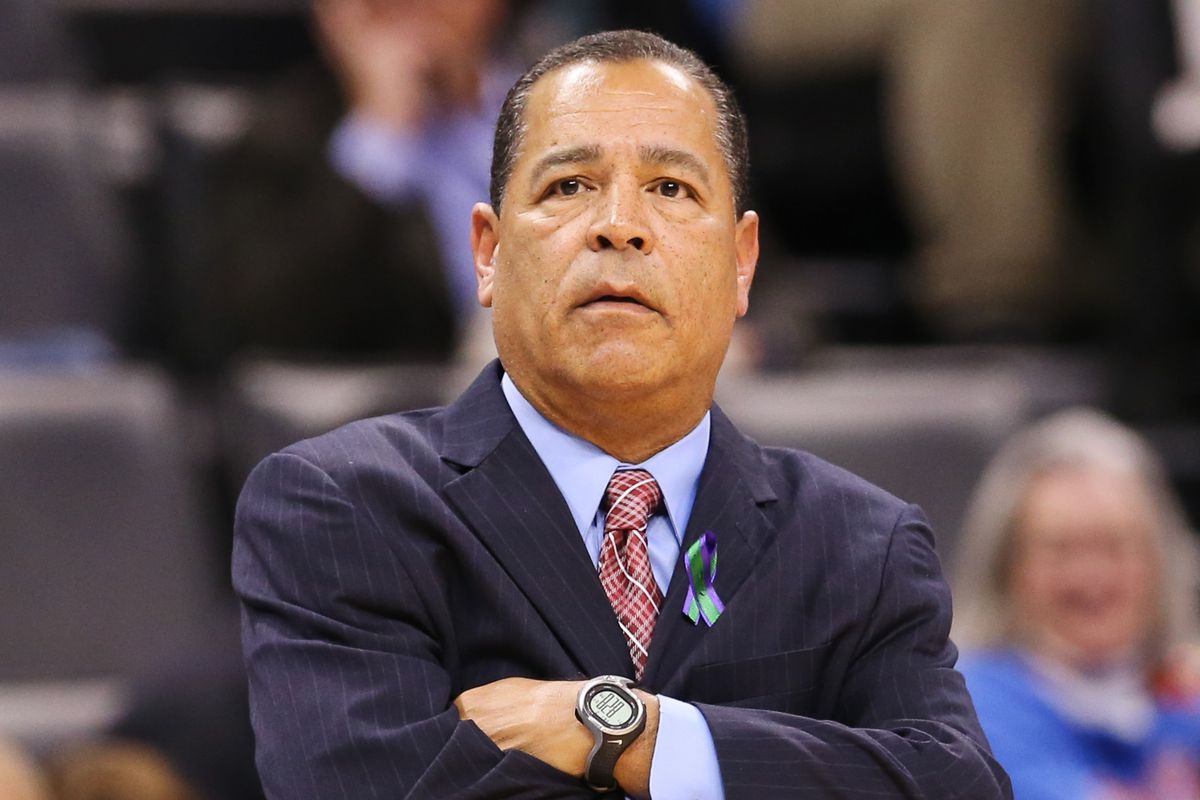 The Houston program is as consistent as any over the past couple of seasons. The expectations are that Memphis will take over the American. However, Houston has a veteran, tough team led by Dejon Jarreau and Fabian White. Also, the addition of Quentin Grimes will give them a go-to the scorer who adds another piece to their deep backcourt. Also, the versatility of Cedrick Alley Jr. defines the program with his defense and versatility. Continued, Nate Hinton will have the opportunity to develop into more of scoring as well. Houston is set up to have a very good season under Kelvin Sampson.

Anthony brings explosiveness as an exceptional athlete. He competes at a high level on a consistent basis. He does a really good job of attacking the basket in the half-court and in transition. On the defensive end, the ability to stay at the front is really good with his technique and energy. Anthony is a solid shooter but could improve as an overall shooter to be able to score consistently at three levels. Anthony will be one of the best freshmen in the country looking to lead North Carolina to another deep NCAA tournament run.

Dotson is arguably the fastest player with the ball in the country and is great in transition. His ability to go off of a ball screen is dynamic and he finishes around the basket well. He’s a good distributor but can be more consistent and look to create for others. Dotson is a solid three-point shooter but could take another step there as well. He is a really good defender and with his small size, he can get under players. His lateral quickness is the top level.

The entire offense revolves around Powell. His shot-making ability is at an extremely high level. He moves without the ball well and he can hit perimeter jumpers on the move or with spot-ups. He’s very physical and strong with the ball and creates really good separation for shot creation and drives. His mid-range game is very good as well. He’s a pure scorer and can lead the country in scoring next year. He’s an average defender who does a solid job of sticking with his man. The lateral movement could improve along with playing with more activity defensively. Powell is looking to lead Seton Hall, who has a great chance to win the Big East with the majority of rotation players returning.

Nwora is an elite scorer at all three levels, as he brings good size and can get his shot over the top. He’s a really good driver who can also have really good body control and pull up well in the mid-range. His three-point shot off the catch and bounce is very good and he runs the floor well in transition. He can be reckless at times and he must improve his overall decision making. In addition, he gets in a good position on defense and brings good length. His body must get stronger to really become a more effective defender. Nwora will be one of the best players in the country on a national title-contending team in Louisville.

Wiseman has the ability to run the floor at a very high level as well as his ability to be highly skilled with the basketball. Further, he is very dominant with his left hand and very difficult to contain in the post. In addition, he brings great size and length which makes him tough to score against. Also, he brings the ability to dominate the glass on both ends. He can step out and hit perimeter jumpers along with being able to defend on the perimeter. Wiseman will be a dominant force next season and could put Memphis back on the national radar.

Harvard is the best set up to make a mid-major run in the NCAA tournament. Bryce Aiken is a dynamic point guard who can create his one scoring to lead this team in big moments. Also, Seth Towns is a very dynamic forward who when healthy can dominate. The depth of Harvard makes them a team who is a tough out. Noah Kirkwood is a really versatile piece who can score and defend at a high level. Furthermore, Christian Juzang and Justin Bassey will add the perimeter depth who will contribute majorly. Harvard is set up to be the mid-major team to make major noise in the NCAA tournament.
Best 6th Man-Tre Mann
Tre Mann will be a great scorer off the bench for Florida. His ability to shoot will help spread the floor for wings Scottie Lewis and Keyonte Johnson, as well as, creating spacing for Kerry Blackshear Jr. Also, he will be able to take over point guard minutes for Andrew Nembhard and Florida won’t have a drop-off. He will add a dynamic player off the bench who will be the perfect spark plug for Florida.

Jones is very physical with good athleticism and is extremely active on the boards. He has the ability to guard on the perimeter and has good hands and feet. He’s got the ability to alter shots well on drives by guards. The versatility of being able to guard on the interior and perimeter very well is a huge positive in his game. Jones does a good job of facing up and going to a quick post moves. He has a solid spin move in the post back to his right hand along with a jump hook. A difficult matchup with his size, physicality and explosion he defines the toughness for Xavier.

After missing the NCAA tournament last season Bob Huggins has very good returners ready to get back. Jordan McCabe and Brandon Knapper will be in the backcourt with the opportunity to be a solid combination. Also, Derek Culver is a force down low and should develop into one of the best forwards in the Big 12. Further, Chase Harley and Emmitt Mathews Jr. will operate the wings and should develop into very solid scores. The big addition is Oscar Tshiebwe who can replace Sagaba Konate and be that athletic player around the basket. Bob Huggins has a young team with many different pieces that will help elevate West Virginia in the Big 12.

Chris Holtman brings in a very stout recruiting class with Alonzo Gaffney, D.J. Carton,and E.J. Liddell to match their returners. Kaleb Wesson will be the go-to big but needs to be in better shape to reach his full potential which is a huge concern. Also, C.J. Walker will give a very solid piece to the backcourt going with D.J. Carton and Luther Muhammad who showed major impact as a freshman. The backcourt has major youth that would hinder the growth of this team. Andre Wesson and Justin Arens will be solid contributors to the wings. Ohio State will be back in the NCAA tournament for this season, however, will not live up to the potential of competing at the top of the Big Ten.

Davis is the go-to player for Detroit, leading them in many statistical categories. He’s very explosive and can get downhill extremely well. His ability to finish around the basket is really good as well as his shot-making ability. Davis will take tough threes and be able to make them at a high rate. He is purely a bucket getter whose shot selection could improve to take the next step. The ability to finish off-balanced in the paint is a very good part of his game. An area in which he can improve is his ability to get others involved which will open the floor more for himself as well. He lacks good size as a defender can give up easy buckets off of switches with height and strength mismatches. His length and athleticism would make him a good on-ball defender if asked to do more of it.