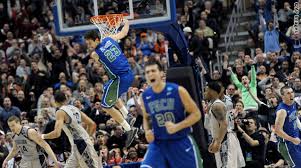 The first round of the NCAA Tournament is now rightfully restored to the games on Thursday and Friday of the first weekend after a short stint (2011-2015) as being reserved for the First Four games on Tuesday and Wednesday. In this time, the Thursday and Friday games have produced some great upsets. Here are some of the best upsets in what should have been the first round during this period:

A 15 seed beating a number two seed is really rare, but Florida Gulf Coast pulled of this feat in 2013. The Eagles won the Atlantic Sun Conference Tournament to become eligible for the NCAA Tournament.  Georgetown had Big East Player of the Year, Otto Porter, who eventually was drafted number three overall in the 2013 NBA Draft. Florida Gulf Coast won the game by ten points and gained fame for having the nickname “Dunk City” after throwing down a lot of highlight-reel jams. Point guard Brett Comer had a double double for the Eagles with 12 points and 10 assists, while Sherwood Brown and Bernard Thompson had over 20 points each. Their offense was fun to watch, but the reason they won the game was that they held Otto Porter to only 13 points. Florida Gulf Coast would go on to be the first 15 seed to reach the Sweet 16 before losing to Florida.

Lehigh won the Patriot League tournament to clinch their tournament bid. The Mountain Hawks were led by a future NBA star, C.J. McCollum, but he was playing with a foot injury. Duke sported a team that featured Mason and Miles Plumlee, Ryan Kelly, Austin Rivers, Seth Curry and Quinn Cook, who all went on to play professionally. The chances of the Mountain Hawks winning without their star was minimal. McCollum scored 30 points, had six rebounds and six assists. Forward Gabe Knutson added 17 points and shot 100 percent from the floor. Lehigh would lose in the second round to Xavier, but will forever be known for knocking of a National Championship contender.

Missouri had one of the best regular seasons in their history and received a two seed. They were loaded with stars such as Phil and Matt Pressey, Marcus Denmon, Kim English and Michael Dixon. Norfolk State came in to this game with a future NBA player in Kyle O’Quinn, but they did not have a very good bench. O’Quinn scored 26 points and grabbed 14 rebounds to lead the Spartans to a victory. The most impressive part of this upset is that Norfolk State had no bench points and still managed to get enough scoring to upset the Tigers.

This is Duke’s second time on this list as they had a few rough years in the NCAA tournament between their NCAA Tournament Championships in 2010 and 2015.  Duke was loaded with talent in Jabari Parker, Rodney Hood, Rasheed Sulaimon and Andre Dawkins. Mercer is unique in that they didn’t have a future NBA player on their roster. Jakob Gallon led the Bears with 20 points and Daniel Coursey added 17 to help score the upset. The Bears moved on to the second round where they lost to Tennessee.

Georgia State won the Sun Belt Conference Tournament to qualify for the NCAA Tournament. Head Coach Ron Hunter had a talented squad that included his son R.J. who was drafted in the 2015 NBA Draft. They were facing off with Baylor who had a balanced roster of good players. The Panthers were without starting point guard Ryan Harrow for this game, who was out with a leg injury. R.J. Hunter stepped up big time with 16 points and even hit the game-winning shot, which caused his father to fall off of his stool in excitement.

With all of the great games lately, the NCAA Tournament is getting better and better. Everybody get your popcorn ready, because this year there will be more upsets.